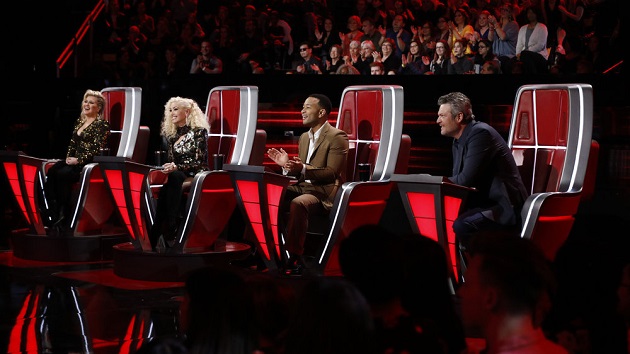 Trae Patton/NBC(NEW YORK) — The Voice live rounds continued on Monday with the top 11 artists competing for America’s votes, performing songs the fans chose for each of them to sing.   Along the way, they were advised by their coaches Blake Shelton, Gwen Stefani, Kelly Clarkson and John Legend.

Here are the highlights of Monday night’s show:

Katie Kadan, from Team Legend kicked things off.  Her “Kananators” wanted to hear a tender moment from the powerhouse Chicago native and chose Harry Nilsson’s “Without You” for her performance.  Kadan’s rendition brought all four coaches to their feet, including her coach, who praised her for delivering a classic ballad with “such nuance, such grace, such poise, such control when it called for it,” then “give us the powerful spiritual anointed notes.”  “I pity anyone that has to sing after you today,” he added.

Team Kelly’s Shane Q heard from his fans, who begged the pop, country and soul artist for “Mercy,” by Shawn Mendes.  They were most likely inspired by a video of Shane performing the song in a coffee shop that Kelly was urged to share with the audience.  Legend noticed a confidence in the performance he hadn’t seen thus far.  Kelly agreed, declaring the “soul…passion” and “fire” she knew he had finally arrived.

Joana Martinez, representing Team Gwen was tasked with singing Selena’s beautiful ballad, “Dreaming of You.”  The 16-year-old got a boost from Gloria Estefan, whose song “Get on Your Feet,” she performed last week.  Gloria reached out to Joana on social media, and in a Facetime chat, where she told the teen she, “kicked butt” on the song.  Afterwards, Gwen called the performance “flawless.”

Another artist from Team Gwen, Myracle Holloway, was asked to sing R.E.M.’s “Everybody Hurts.”  Gwen was excited to see what the soulful singer could do with the alternative song.  In a touching moment, Myracle, who personally experienced emotional trauma and abuse, heard from other victims who were inspired by her.  Gwen praised Holloway for “seizing the moment.”

Team Legend’s Marybeth Byrd has been feeling the love from her “byrdwatchers” back home in Arkansas, who requested Grace Potter & the Nocturnals’ “Stars.”  Legend’s advice for the 18-year-old was to add some of her vocal fills to the song.  Kelly thought Byrd “soared on the song.”  Legend dubbed it one of her best performances yet.

Even if Team Blake’s Ricky Duran doesn’t win the competition, he’ll at least walk away with new guitar, gifted to him and his teammates by Blake.  Ricky’s fans wanted to see how Duran handled Rod Stewart’s “Downtown Train,” and he didn’t disappoint.  Legend was impressed with Ricky’s “level of polish,” declaring he should be “up here coaching.”  Shelton heaped even more praise on the 29-year-old Austin, Texas native, noting that “people in the business were reaching out to him” about Ricky.  “It’s taken you a minute to finally get a chance to have your moment.” added Blake.  “Brother, you’re having it right now.

“The Voice returns Tuesday night at 8 p.m. ET on NBC.