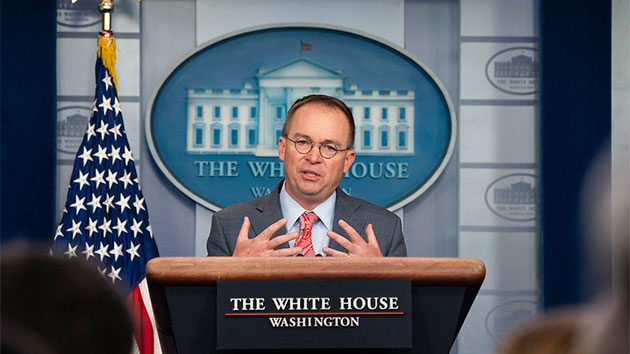 Official White House Photo by Joyce N. Boghosian(WASHINGTON) — An ongoing internal review by the White House of why aid to Ukraine was held up earlier this year has uncovered many conversations between senior White House aides focused on justifying the hold up and raising questions of whether pausing the aid was legal, according to sources familiar with the review.The review has focused on overall operations in the administration about events surrounding President Donald Trump’s July phone call with the president of Ukraine, with one of the focuses being activities between acting White House Chief of Staff Mick Mulvaney and the Office of Management and Budget.The Washington Post first reported on the initial findings of the review.House Democrats investigating President Donald Trump as part of an impeachment inquiry have repeatedly demanded the White House turn over documents and records, as well as to make key officials, including Mulvaney and officials from the Office of Management and Budget, available for questioning. So far, the White House has rebuffed all of those requests.Two White House officials — Fiona Hill, who has since left the White House after serving as senior director for Europe and Russia, and Army Lt. Col. Alexander Vindman, director of European Affairs at the National Security Council — have testified as part of the House impeachment inquiry that they were told that Mulvaney helped to coordinate a pressure campaign against Ukraine.Mulvaney has declined to testify as part of the impeachment inquiry, despite having received a subpoena from Congress.At the center of the ongoing House impeachment inquiry is an effort by Trump and his personal attorney Rudy Giuliani to get Ukraine to launch an investigation that would have included his 2020 political rival, Joe Biden.Copyright © 2019, ABC Audio. All rights reserved.