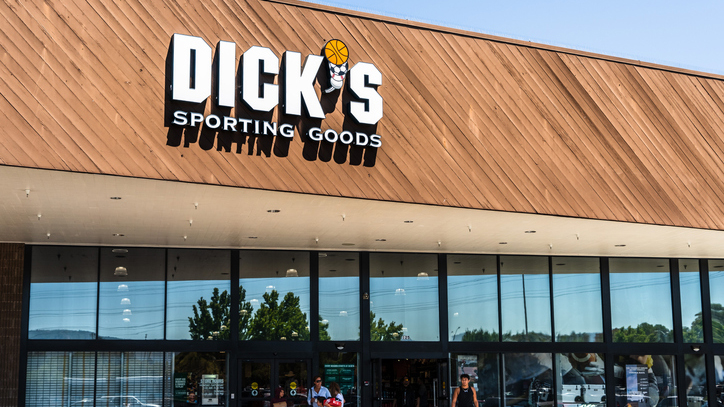 Andrei Stanescu/iStock(NEW YORK) — Dick’s Sporting Goods stock shot up nearly 20% on Tuesday after the company announced earnings that beat expectations.In a note to investors, the company reported a 6% increase in same-store sales, its best result since 2013. E-commerce sales for the third quarter also increased by 13%.Shares on Wednesday were down slightly from Tuesday’s high but were still trading 17% above Monday’s closing price.The company saw growth “across each of our three primary categories of hardlines, apparel and footwear,” according to CEO Edward Stack.”As we head into the holiday season, we remain very enthusiastic about our business, and we are pleased to increase our full year sales and earnings outlook for the third time this year,” Stack added in a statement.The athletics and outdoor goods superstore took a public stand last year when it announced it was ending sales of assault-style rifles — and destroying its stock of them — as well as banning the sale of guns to people younger than 21. The company reportedly destroyed $5 million worth of assault rifles.CEO Stack announced the decision in the wake of the school shooting in Parkland, Florida, that left 17 people dead. The gunman behind the shooting rampage at Marjory Stoneman Douglas High School had bought a gun at Dick’s in 2017. It was not the gun nor the kind of gun used in the massacre, however.Dick’s policy change reportedly cost the company an estimated $150 million in lost sales, or 1.7% of annual revenue, Bloomberg News reported.The move faced backlash from some, including a 20-year-old Oregon man who sued the store in March 2018 after he was denied being sold a rifle because of the new age restrictions.

US hiring slows but remains strong, as economy adds 315,000 jobs