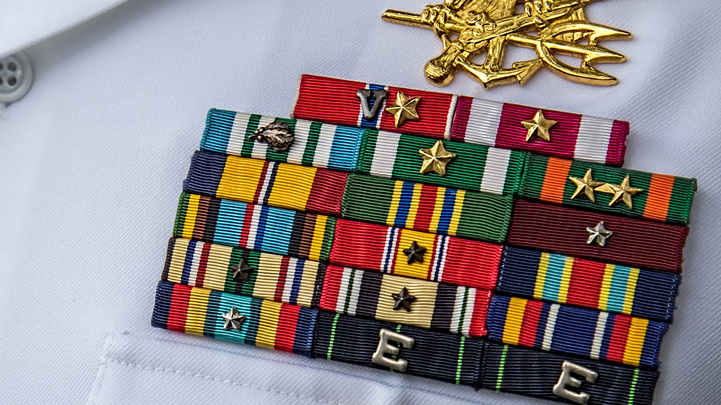 Bill Chizek/iStock(WASHINGTON) — The Navy announced Wednesday that three SEAL officers will also not face Trident Review Boards that could have ended with the Trident pin that identifies them as SEALs being taken away.The three officers were in charge of Eddie Gallagher’s unit at the time the SEAL was allegedly involved in the 2017 death of an Islamic State detainee. He was acquitted of those charges earlier this year, though he was convicted of posing with the detainee’s corpse.Defense Secretary Mark Esper announced on Monday that under President Donald Trump’s direction he was letting Gallagher keep his Trident pin. A review board could have taken it away from him, meaning he was no longer a member of the elite SEAL community.That news followed Esper’s firing of Navy Secretary Richard Spencer, who had gone behind Esper’s back to privately pitch to the White House a scenario where Gallagher could face a review board, but still retain his pin.But the fate of the three officers who commanded Gallagher’s SEAL unit was left in the Navy’s hands.Lt. Cmdr. Robert Breisch, had served as the SEAL troop commander at the time of Gallagher’s misconduct, Lt. Jacob Portier, was the officer in charge, and Lt. Thomas MacNeil was the assistant officer in charge.In making the decision, acting Navy Secretary Thomas Modly said their cases could be handled administratively and should not continue to be a distraction for the Navy.”I have directed the Chief of Naval Operations to terminate the Trident Reviews for three Naval Special Warfare officers,” Modly said in a statement issued late Wednesday. “Given the unique circumstances of these three remaining cases, I have determined that any failures in conduct, performance, judgment, or professionalism exhibited by these officers be addressed through other administrative measures as appropriate, such as letters of instruction or performance observations on their officer fitness reports.””The United States Navy, and the Naval Special Warfare Community specifically, have dangerous and important work to do,” he added. ” In my judgment, neither deserves the continued distraction and negative attention that recent events have evoked. “Modly said his decision to not proceed with the three review boards should not “should not be interpreted in any way as diminishing” the SEAL’s high ethical standards of conduct.”Navy uniformed leaders have my full confidence that they will continue to address challenging cultural issues within the Naval Special Warfare community, instill good order and discipline, and enforce the very highest professional standards we expect from every member of that community,” Modly said in the statement.”These are standards that scores of brave Sailors have given their lives to establish and preserve” he added. “It is our obligation to honor their sacrifice, and the values of our nation, in everything we do in peace, in crisis, but most especially in war. We can, we must, and we will get this right.”Gallagher will now retire on Nov. 30 as a Navy SEAL.