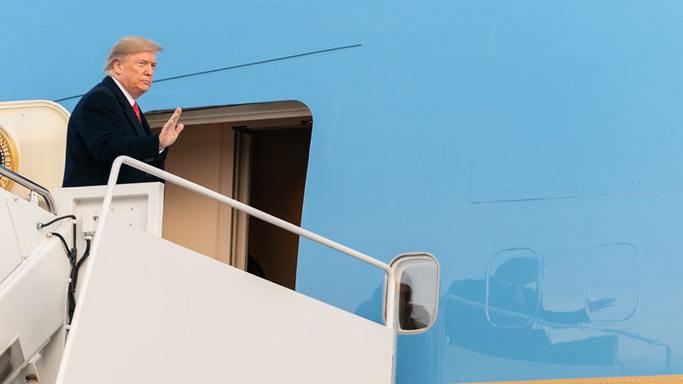 Official White House Photo by Shealah Craighead(WASHINGTON) — President Donald Trump railed against news media coverage of his recent visit to Walter Reed National Military Medical Center at a rally in Sunrise, Florida, claiming it had been reported he’d had “a massive, unbelievable heart attack” — and then adding he has “a gorgeous chest.”The president doubled down on the “gorgeous chest” claim Wednesday morning, tweeting a photo-shopped image of his face superimposed on what appeared to be the chiseled body of fictional boxer Rocky Balboa.  At his “homecoming” rally Tuesday night, Trump assured the crowd of supporters that his unannounced Nov. 17 visit to the medical facility was for a “a very routine physical.” But the visit was not disclosed ahead of time, prompting questions about his health.”They [the media] said he wasn’t wearing a tie; this is a sign of a massive heart attack,” Trump said, apparently referring to reporters noting he was not wearing a tie, as usual, as he got into his motorcade. “They said, he went into the hospital — and it’s true, I didn’t wear a tie — why would I wear a tie if the first thing they do is say take off your shirt, sir, and show us that gorgeous chest?”Trump said that he hadn’t worn a tie to Walter Reed because he knew he would’ve been asked to remove it, before continuing to mimic the supposed interaction with his doctors.”It’s true. Show — we want to see, sir. We’ve never seen a chest quite like it.”Trump went on to say that his visit to Texas in the day following his hospital visit, along with his presence at that moment, served as further proof of his good health.”Hey, let me tell you if I didn’t feel great, I wouldn’t be ranting and raving to 21,000, 22,000 people with lots of people outside I can tell you,” Trump said to applause. “If you’ve had a heart attack, you don’t leave the hospital right away. You stay there for a little while, about six weeks maybe.”Despite his claim that it had been reported that his “tremendous pain” was a heart attack, ABC News could not find any major news media reporting that he had experienced such a condition and the White House physician Dr. Sean Conley has denied Trump had chest pain.Previous medical physical examinations found that Trump was in relatively good health, but his doctors have suggested he work at lowering his weight and cholesterol levels.