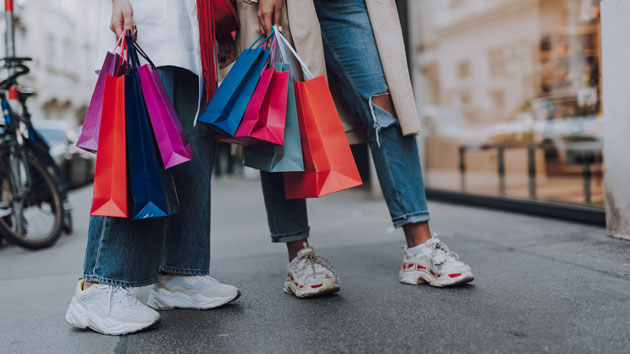 iStock(NEW YORK) — It’s the Super Bowl of shopping, and it’s starting early this year.Businesses are already rolling out Black Friday deals because the countdown to Christmas this year is several days shorter than last.More than 165 million people in the United States are expected to shop on Thanksgiving Day, Black Friday, over the weekend and through Cyber Monday, according to an annual survey released this month by the National Retail Federation and Prosper Insights & Analytics.”The tradition of Thanksgiving weekend holiday shopping has become a five-day event with consumers spending money in stores, supporting local small businesses, and online with their mobile devices and computers,” National Retail Federation president and CEO Matthew Shay said in a statement. “Even as people are starting to purchase gifts earlier in the season, consumers still enjoy finding good Thanksgiving deals and passing time shopping with family and friends over the long holiday weekend.”Major retail stores, including Best Buy, Kohl’s, Macy’s and Target, will be opening their doors on Thursday to launch Black Friday doorbuster deals early. Many will also start Black Friday promotions online, hours before their brick and mortar shops open.But keep in mind that retailers in some states, like Maine, will remain shuttered on Thanksgiving due to state laws. Store hours will also vary depending on the county or municipality.The National Retail Federation estimates holiday retail sales in the United States in November and December will rake in as much as $730.7 billion, a 4.2% increase from last year.Of those planning to take advantage of the deals, about 47 percent will choose to start their shopping in-store versus online, according to the survey, which analyzed nearly 8,000 adult consumers’ plans for Thanksgiving weekend.“We expect the biggest increase in potential shoppers for Thanksgiving Day this year,” Phil Rist, executive vice president of strategy at Prosper Insights & Analytics, said in a statement. “We anticipate that people may head to stores if they are open or shop from their phones while watching football.”Another survey by RetailMeNot and Kelton Global found that only one in three Americans are currently aware that there is nearly one week less between Thanksgiving and Christmas this year compared to 2018.However, 68% say the shortened time frame will impact their holiday shopping this year.Meanwhile, 76% of retailers plan to offer more deals and discounts this year than last, and 85% of customers plan to shop for the holiday season across Black Friday and Cyber Monday this year — compared to 78% in 2018, according to the survey, which interviewed more than 1,000 consumers and over 200 senior retail marketing leaders.Copyright © 2019, ABC Radio. All rights reserved.