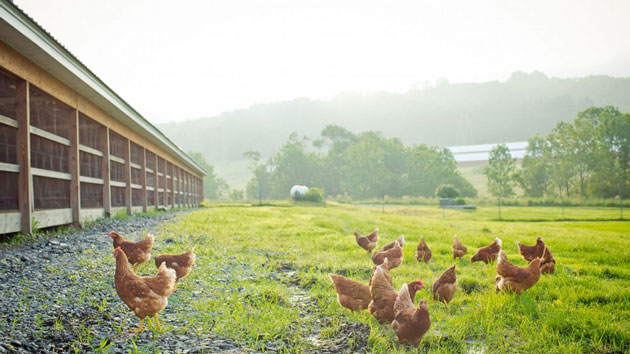 Pete and Gerry’s Organic Eggs(NEW YORK) — Whether it’s to bind breadcrumbs in stuffing or create a creamy custard for pumpkin pie, good eggs are an integral part of any Thanksgiving feast.One family-run company in rural New Hampshire has lent a helping hand in delivering quality, certified-organic, free-range eggs to people’s Turkey Day tables for decades.There are dozens upon dozens of different egg colors, sizes and varieties to choose from in any given market’s refrigerator case. For many shoppers, those cartons of eggs come from a rural community where Pete and Gerry’s Organic Eggs was first founded.CEO Jesse Laflamme told ABC News’ Aaron Katersky during an interview for the ABC Audio special “America’s Bounty” that his grandfather made their family’s mark on the Monroe dairy farm scene just 45 minutes south of the Canadian border in the mid-1800s.Laflamme, who grew up in the small city with a population of 700, said he returned to the picturesque farm on the Connecticut River after college to oversee the business.”We were hanging on by just our fingernails,” Laflamme said. “We had just a couple employees and a tiny amount of business — but we were in the right place at the right time doing things the right way with the organic market, we were really lucky.”Laflamme explained that the combination of sales growth, great relationships and the pivot to work with family farms gave their business a purpose.He said an emphasis on hen welfare has become a distinguishing feature for their network of farms.”Since the ’60s, most egg-laying hens in the U.S. have not been allowed outside,” Laflamme said. “Organic and free-range is a reversal of that. And we’re able to make it work because of our scale — the small-scale farms.””Factory farming — caged-egg farming — is without a doubt one of the most egregious industrial animal abuses that there is,” he added.Instead of placing millions of hens in one small area, Laflamme said they have created a network of small, like-minded family farmers that have the land base to get hens outside. Ultimately, he said, that helps their business reach the scale required to compete.He oversees 240 employees and a multimillion-dollar business that relies on hundreds of Hy-Line Brown hens.”They’re a mix of a Rhode Island Red and a white Leghorn,” he said of the breed, adding that they’re “really good at laying eggs.”Not all of the birds roost on the same property, allowing them more room to roam throughout the network of family farms. Once they lay eggs, Laflamme’s barn acts as a refrigeration site for them.The hens eat organic corn and soybeans, some of which are supplied locally and “filled with vitamins and minerals,” Laflamme said.”They do eat a lot of grain,” he said, noting that it’s a large part of what makes them “organic.””It’s feed, welfare and then what’s not allowed, which is medications, antibiotics, pesticides and herbicides around the farm [that] are prohibited,” he said. “It’s also about the flock size and the care and the lack of stress that keeps them healthy. It’s pretty good to be a Pete and Gerry’s chicken.”The “extremely social” auburn and black-feathered birds loudly cluck in unison, echoing through the rafters where they roost.When it comes time to feed, the hens flock to a conveyor belt-like trough system that delivers their food.The nesting area looks like a row of dog houses with habitats 4 feet wide and 20 inches deep. Slanted astroturf floors slope downward to a conveyor belt where the eggs are collected.Laflamme explained that the hens can begin laying eggs once they are about 6 months old and continue to produce for just over a year.Pete and Gerry’s works with more than 130 farms in 12 states and earlier this year the company was sued by People for the Ethical Treatment of Animals. The PETA lawsuit claimed the company’s Nellie’s Free Range Eggs brand misled consumers by depicting on the label hens roaming in a grassy field after a video at one of the company’s partner farms in Pennsylvania appeared to show otherwise.The company claims the video PETA references is a mischaracterization of their operations and filed a motion this month to have the lawsuit dismissed. Laflamme called the lawsuit a publicity stunt.”It’s very personal, this is my family’s business this is a group of family farmers and we don’t want to mislead and we want to do what we say we’re doing,” he said.In 2003, Pete and Gerry’s became the first Certified Humane egg farm in the country, under the auspices of Humane Farm Animal Care.”We love our hens,” he said simply. “Obviously you know we’re on a large commercial scale — we’re working with small family farms for the reason that we want to work with people who have a relationship with the animals they’re taking care of.”Copyright © 2019, ABC Radio. All rights reserved.

After calling off strike, 2,500 Boeing workers to vote on contract Wednesday