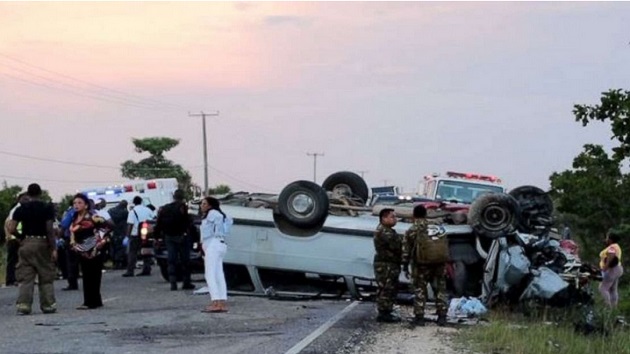 News 5 Belize(BELIZE CITY, Belize) — Two Americans were among seven people killed after an accident involving a tour bus in Belize, the State Department has confirmed.A third international traveler and four locals also died in the crash, authorities said.Carnival Cruise Line confirmed that seven guests on the Carnival Vista were in a bus accident while on an independent tour, and that there were “guests from at least one other cruise line on the bus.”Police were called to the scene of the accident, apparently a head-on collision between two vehicles, around 3:10 p.m. local time on Wednesday, Alejandro Cowo, an official with the Belize Police Department, said at a press conference.In addition to the seven who died, seven others remained hospitalized, Cowo added.Investigators were “still determining what exactly led to the accident and who is at fault,” Cowo said.”We are aware of U.S. citizen casualties resulting from the traffic accident on George Price Highway in Belize,” a State Department official told ABC News. “We are providing all appropriate consular assistance and are monitoring the local authorities’ investigation. We extend our sincerest condolences to families of those lost in the accident. Out of consideration for those involved, we have no further information at this time.” Copyright © 2019, ABC Radio. All rights reserved.