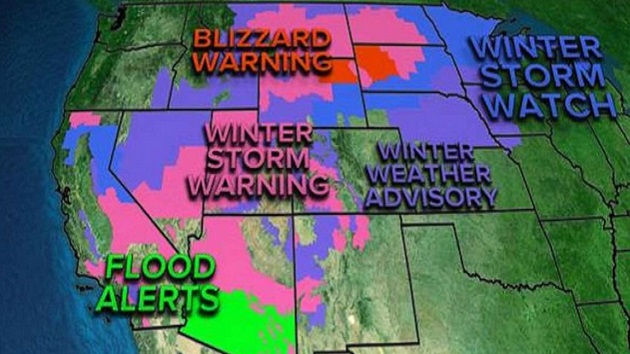 ABC News(PHOENIX) — More than a dozen U.S. states, from California to Michigan, are under weather alerts Friday as a major storm in the west is forecast to sweep across the country, bringing heavy snow and rain through the weekend. The storm system, coming from the Southwest, is expected to hit southern Arizona with heavy rain and potentially life-threatening flash flooding on Friday morning. Flash flood warnings remain in effect west of Phoenix, where rainfall rates have been up to 1 inch per hour.The storm is also forecast to dump heavy snow across the mountains from California to Wyoming on Friday. Winter storm warnings remain in effect from the Sierra Nevada to the Rocky Mountains, where 2 to over 4 feet of snow is forecast to accumulate at the highest elevations.The snowfall is expected to taper off Friday night.Parts of Interstate 5 were shut down on Thanksgiving in Southern California due to heavy snow and dangerous travel conditions. Even the city of Palmdale, which is north of Los Angeles and in the lower elevations of the state, saw 3 inches of snow.The storm is expected to move into the Central U.S. by Saturday, with severe weather — including heavy snow and rain — stretching from the Northern Plains to the Gulf Coast.Parts of the Northern Plains and the Upper Midwest could see blizzard conditions and up to a foot of snow. Meanwhile, damaging winds and isolated tornadoes are possible across Texas, Arkansas, Louisiana and Mississippi.Winter storm watches will remain in effect across the Northern Plains and into the Midwest where additional heavy snow, whiteout conditions and dangerous travel conditions are expected for Friday night into Sunday.From there, the storm is forecast to continue moving across the country, reaching the Northeast by Sunday with a messy mix of rain and snow. There may be widespread travel delays in the region as people head home from the Thanksgiving holiday weekend. Some northeastern cities and suburbs, from New York City to Boston, could see wintry weather on Sunday and Monday.As the East Coast grapples with the cross-country storm on Sunday, the West Coast will likely see yet another round of heavy rain and snow that could impact holiday travel.