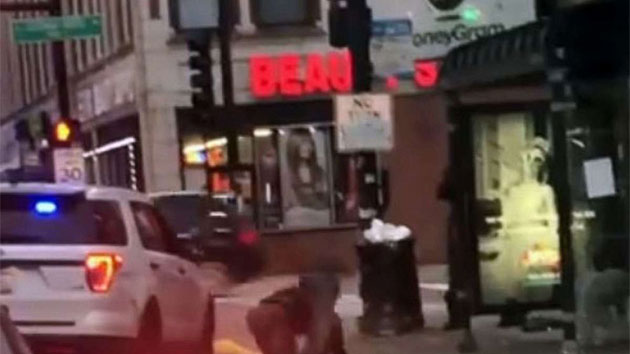 Jovonna Jamison(CHICAGO) — Chicago authorities are investigating what officials described as a “very disturbing” video that showed an officer slamming a man to the ground during an arrest.The footage shows a Chicago police officer on Thursday lifting a man, who was pushed up against a patrol car, off his feet and throwing him to the ground.The 29-year-old man’s head appears to hit the curb and he does not seem to move for the remainder of the 41-second video.Another officer stands over the man, while the officer in question walks around him as he’s on the ground.Jovonna Jamison, who recorded the video, told ABC News in an interview Friday that she was “shocked” when she saw the officer pick the man up.”I was praying and hoping he was alive cause he wasn’t moving,” Jamison said.Police said in a statement the man was drinking in public, which prompted them to approach him.However, according to police, he became “irate” and licked the officer’s face before spitting in his eye and mouth.”The officer then performed an emergency takedown, taking the offender to the ground,” according to the statement.Jamison said she did not see him resist in any way.”That gentleman didn’t do anything wrong,” she said.Chicago police spokesman Anthony Guglielmi said on Twitter the arrest was under investigation and the “actions depicted on a social media video” are being taken very seriously.Mayor Lori Lightfoot said on Twitter that “while a single video does not depict the entirety of the interactions between the police and the individual, this particular video is very disturbing.””It is my expectation that the investigation will be comprehensive and expedited so that the public may gain a complete picture of what happened,” Lightfoot tweeted.The city’s Civilian Office of Police Accountability (COPA) said it is the agency investing the matter. COPA asked anyone with information to come forward.Police said the man was taken to the University of Chicago and is in stable condition. The officer was also taken to a hospital, though it was not immediately clear for what.Charges against the man are pending, according to officials.Copyright © 2019, ABC Audio. All rights reserved.