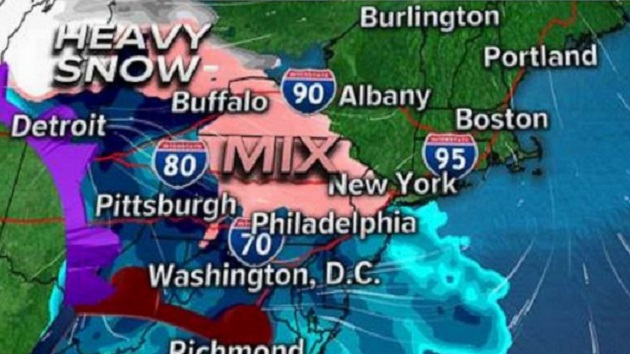 ABC News(NEW YORK) — A major winter storm continues to make its way across the U.S., and it’s bringing inches of snow and the threat of severe thunderstorms along with it. The storm dumped mounds of snow in parts of the West — with California getting 4 feet in Big Bear Lake and Cedar Grove — and is now heading into the Central Plains with blizzard conditions.Blizzard warnings are in effect in parts of the northern High Plains and in parts of northern Minnesota, where the city of Duluth may see about 10 to 20 inches or more of snow.Wind gusts over 40 mph will also be possible in the region, making travel extremely dangerous through the holiday weekend.In the southern parts of the country, some tornadoes from the storm may hit the area and bring strong, potentially damaging wind gusts and isolated large hail.A tornado watch has been issued in until 9 p.m. EST from east Texas into northern Louisiana and southern Arkansas.The storm is expected to reach the Northeast by Sunday.Residents in New York, Pennsylvania and New Jersey can expect to see a mix of snow, rain and freezing rain Sunday morning.Residents should use caution when out and about as the trifecta can be dangerous.Winter storm alerts have already been issued for a large part of the region including Boston, Hartford and Albany where snowfall forecasts show there will be, respectively, about 3 to 12 inches, 5 to 11 inches and more than 9 inches.It is unlikely likely that the New York City area will be hit with much snow, but mixing and changing rain is still expected to make travel messy.By the afternoon, warm air could prompt a break in the snow for the coastal Northeast, but it won’t be long lasting.On Monday, cold air is expected again and snow will move through the region again for most of the day.Snow could be heavy times, especially in the Lower Hudson Valley of New York and into Connecticut.Another major storm is making its way to the West Coast and will bring an atmospheric river of moisture to California, beginning Saturday night lasting through the weekend.