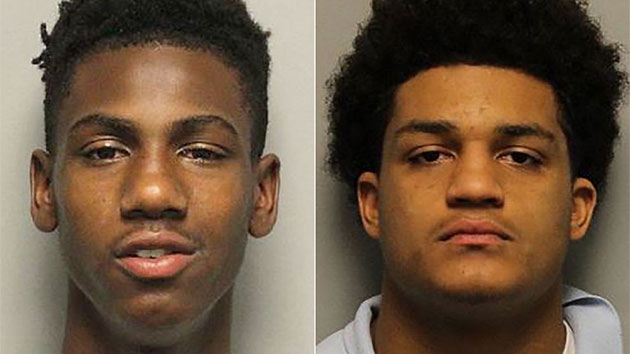 Metro Nashville Police Department(NASHVILLE, Tenn.) —  Police are searching for four teenagers, including two accused of murder, who escaped from a juvenile detention center in downtown Nashville over the weekend.Murder suspects Decorrius Wright, 16, and Morris Marsh, 17, allegedly ran out of the Davidson County Juvenile Detention Center at around 10 p.m. Saturday night along with two other inmates, identified as 17-year-old Brandon Caruthers and 15-year-old Calvin Howse, authorities said Sunday.The teens were on a work detail when their staff supervisor left them to address a fight at another location inside the facility, according to police. They managed to get onto an elevator and used staff protocols to ride to the ground floor where they went through a series of doors and exited to the outside.Authorities said they are considered dangerous and are asking for the public’s help in locating them. Authorities said at least 35 minutes elapsed before the Metro Nashville Police Department was notified of the escape.Wright is accused in the murder of 24-year-old Kyle Yorlets, a Nashville musician who was fatally shot in an alley behind his home in February, according to police. Marsh is suspected of killing 19-year-old Charles Easley in April.Caruthers had been transferred to adult court on an August 2018 armed robbery case in south Nashville, according to police. Howse was last arrested Nov. 21 on charges of auto theft and gun possession, police said.Police were not aware of any confirmed sightings as of Sunday afternoon. The department said it reviewed surveillance footage from a store in Clarksville, Tennessee, located about 50 miles northwest of Nashville, in connection to a possible sighting, but investigators later determined that it was unrelated.”After further review of the Clarksville market video from multiple angles by an MNPD Juv Crime Task Force officer in Clarksville it has just been determined that the persons in the video are not the escaped teens,” the department said in a tweet Sunday. “The investigation is continuing in Davidson County.”ABC News does not normally name juveniles, but are doing so because police said they are dangerous individuals and have released their names and photos. Anyone with information about the escapees are asked to call Nashville’s Emergency Communications Center at 615-862-8600 immediately. Copyright © 2019, ABC Audio. All rights reserved.