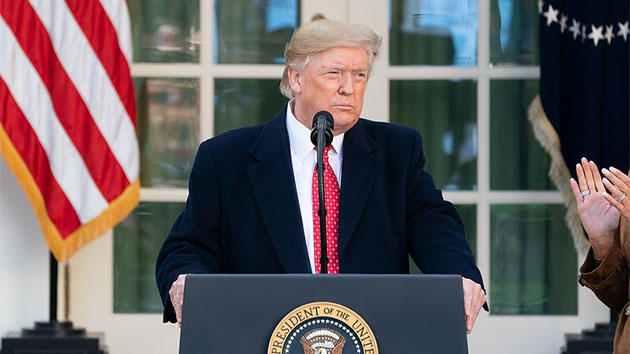 Official White House Photo by Andrea Hanks(WASHINGTON) — President Donald Trump and his lawyers will not participate in Wednesday’s impeachment hearing in the House Judiciary Committee, according to a letter from the White House to the committee obtained by ABC News. “As for the hearing scheduled for December 4, we cannot fairly be expected to participate in a hearing while the witnesses are yet to be named and while it remains unclear whether the Judiciary Committee will afford the President a fair process through additional hearings. More importantly, an invitation to an academic discussion with law professors does not begin to provide the President with any semblance of a fair process. Accordingly, under the current circumstances, we do not intend to participate in your Wednesday hearing,” White House counsel Pat Cipollone wrote in a Sunday evening letter to Chairman Jerry Nadler.The absence of White House participation follows weeks of vocal protests from the president and Republicans in Congress, who have accused Democrats of blocking their due process rights.The Judiciary Committee has yet to decide on how many hearings it will have or if it will call fact witnesses.Nadler, D-N.Y., gave the White House a deadline of 6 p.m. Sunday to tell the committee if they plan to participate in Wednesday’s hearing, after inviting the president and his counsel to attend. Nadler also wrote a separate letter to the White House asking them to alert the committee by 5 p.m. Friday about whether they plan to present a defense or participate at all in the committee’s impeachment proceedings.The president tweeted on Saturday that he will be representing the United States at NATO during the scheduled hearing.”I will be representing our Country in London at NATO, while the Democrats are holding the most ridiculous Impeachment hearings in history. Read the Transcripts, NOTHING was done or said wrong! The Radical Left is undercutting our Country. Hearings scheduled on same dates as NATO!” Trump said on Twitter.The Wednesday hearing will include legal experts as witnesses and is titled, “The Impeachment Inquiry into President Donald J. Trump: Constitutional Grounds for Presidential Impeachment,” as Democrats in the House decide whether to draft articles of impeachment.Following weeks of depositions behind closed doors and public hearings with witnesses to Trump’s alleged actions on Ukraine, members of the House Intelligence Committee will be able to view the panel’s draft report on the impeachment inquiry findings on Monday, according to a committee official. The committee will vote on the report Tuesday, and if adopted, it and any minority views will be referred to the Judiciary Committee.Nadler indicated in a letter to Ranking Member of the Judiciary Committee, Rep. Doug Collins, R-Ga., that he would be ready to consider any requests for subpoenas or witnesses by the minority on Dec. 9. Copyright © 2019, ABC Audio. All rights reserved.

Biden seeks to slash carbon emissions in half by 2030