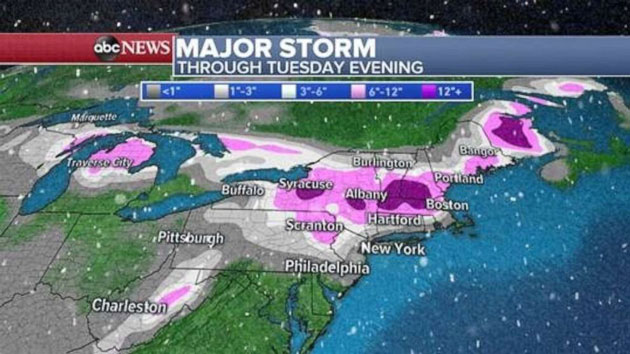 ABC News(NEW YORK) — Weather alerts are posted across the country in over 30 states from coast to coast.There are 2 storms impacting the U.S. including one in the Northeast and one moving onshore on the West Coast.As we finish off the holiday weekend, conditions are unfavorable across many major U.S. highways and interstatesThis morning, a storm system located over the Midwest is bringing widespread impacts from the High Plains to the southern Gulf States.Strong storms caused severe weather on Saturday from Iowa to the southern Gulf States – severe weather was reported in 6 states including a brief tornado in Iowa and reports of wind & hail in Oklahoma, Texas, Arkansas, Mississippi and Louisiana.On the south side of the storm system, heavy rain and wind continues to impact states from Louisiana to the southern Great Lakes.On the north side of the system, icy conditions are occurring in parts of the Great Lakes states and into the higher elevations of Pennsylvania and West Virginia.Further north, heavy snow continues to impact the High Plains this morning, with the snow heading east over the northern Great Lakes region through Sunday.A separate storm system has moved onto the West Coast. This system has set up an “atmospheric river” bringing in lots of moisture to an area stretching from southern California north through Oregon and into southern Washington.Heavy rains in parts of California are prompting concerns of mudslides, while heavy snow is the main concern for the mountain regions and higher elevations.The storm system will push east through Sunday bringing weather impacts to highly populated areas across the mid-Atlantic and northeastern U.S.By Sunday evening, heavy rains will move through the mid-Atlantic states with a concern for winter weather further north.Snowfall will impact states from Iowa to Maine as the colder northern side of the system spreads out over the Midwest and Northeast.In transition areas along I-80 and parts of I-95 in New England, an icy wintry mix can be expected through Sunday evening.By Monday morning, we’ll see the icy mixing line set up generally along the I-95 corridor with any potential accumulation concerns concentrated to the north and west of this line.Some areas in the higher elevations along the Appalachian mountain range will see snow and icy mix through Monday.By Monday evening, the backside of the system will bring in colder air prompting concerns for wintry precipitation from New Jersey through New England.Any significant accumulation is likely to remain north and west of the I-95 corridor in New Jersey; however hazardous conditions will be more widespread through New England states.This storm system is also bringing the threat for high winds across the plains this morning. As the system moves east, gusty winds will push into the mid-Atlantic and the Northeastern states.High wind gusts coupled with rain, snow and ice may lead to some tree and powerline issues through Monday evening.Overall, a general 6 to 8 inches is expected in the upper Great Lakes, parts of New York state and into New England. Some areas could see local amounts pushing 12 inches by Tuesday as the storm finally pushes offshore.A storm system located off the west coast has set up an “atmospheric river” bringing excessive moisture from California to Oregon.Heavy rain along with mountain ice and snow will continue through the weekend and into Monday night. In the mountain elevations of California, some areas are expecting upwards of 4 feet of snow through Monday night.The lower elevations could see 2 to 4 inches of rain through Monday, with some areas pushing local totals of over 4 inches.Flooding and potential mudslides are the major concern for areas being impacted by these heavy rains. High winds are also a concern with this western storm with several power outages already being reported in California this morning.The gusty conditions will last through the weekend, calming down through the day on Monday.Copyright © 2019, ABC Audio. All rights reserved.

How recovery efforts are going in Lee County after Hurricane Ian