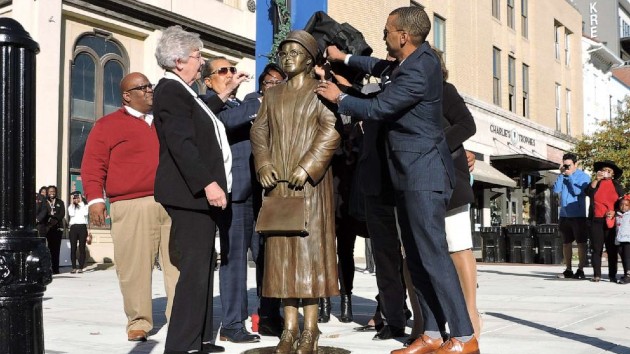 City of Montgomery(MONTGOMERY, Ala.) — City officials in Montgomery, Alabama, unveiled a new statue of Rosa Parks on Sunday, exactly 64 years after the civil rights pioneer was arrested for violating segregation laws and refusing to give up her bus seat to a white passenger. Parks was honored with a life-size bronze statue in downtown Montgomery, just a few feet away from where she boarded the now infamous city bus. The statue shows Parks standing firm in a long coat with her hands clutching her purse in front of her.Her arrest on Dec. 1, 1955, sparked the Montgomery Bus Boycott, a demonstration organized by Rev. Martin Luther King Jr., which led to the desegregation of public transportation in the city. The successful demonstration also played a key role in the passage of the Civil Rights Act of 1964, which integrated public spaces nationwide.”To stand here today as Montgomery’s mayor where Mrs. Rosa Parks stood defiant against systemic injustice infecting our community and our country speaks to the magnitude of this moment and the progress achieved in our city,” Montgomery Mayor Steven Reed said in a statement Sunday. “This progress, coupled with the dawn of a new era of reconciliation and revitalization, underscores Montgomery’s status as the Birthplace of Civil Rights and a light unto the world.”The memorial was erected in partnership with the city of Montgomery, Montgomery County, the Alabama Department of Tourism and the Montgomery Area Business Committee for the Arts.”This statue has been a long time coming and Mrs. Rosa Parks is more than deserving as she represents all of the many foot soldiers who sacrificed their lives and families to make a change,” Montgomery County Commission Chairman Elton Dean said Sunday. “This is a great day for Montgomery County. The seeds she planted are ever continuing to be harvested.”Sunday also marked the second-annual Rosa Parks Day in Alabama. City officials held several events throughout Montgomery to honor the civil rights icon over the weekend. Parks died in 2005 at the age of 92.