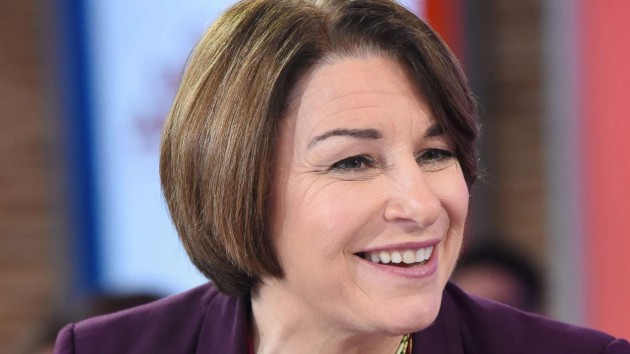 ABC News(NEW YORK) — Minnesota Senator and Democratic presidential candidate Amy Klobuchar on Monday likened the impeachment hearings on Capitol Hill to “a global Watergate.”Klobuchar, who was a guest on The View, said President Trump’s alleged request for political dirt on Democratic presidential candidate and former Vice President Joe Biden may have threatened national security.When asked if she believed the president committed a crime, Klobuchar maintained that she wants to hear all the evidence during a potential Senate proceeding before making a decision.“I want to look at all the evidence,” Klobuchar said. “I am the one that said this is impeachable conduct. You have to look at each count, but I think this is very serious what happened here, and it will come over to the Senate, and remember, this isn’t a criminal proceeding. It is actually a decision under the constitution about whether or not he should be removed from office.”Klobuchar told ABC News’ chief anchor George Stephanopoulos last week that “what’s really important to the nation is that we hear the evidence and that it’s a fair trial,” a sentiment she echoed on the debate stage in Atlanta, Ga., last month.Asked by The View co-hosts if a Senate proceeding would affect her presidential campaign, Klobuchar said she has no choice but to do her job.“What else am I going to do?” Klobuchar said. “I have a constitutional duty and I have to fulfill that duty.”She also opened up about former New York City Mayor Michael Bloomberg’s entry into the crowded Democratic presidential contest.“My issue is you can’t simply allow wealthy people to come in and buy elections. That is not what this country is about,” Klobuchar said. “My hope is that the people will look at the candidates and they’ll make a decision based on who is best to govern and who is actually best to lead the ticket.”Bloomberg’s bid comes as former Massachusetts Gov. Deval Patrick went public with his own presidential campaign, pitching himself as a moderate choice and contrast to progressive front-runners Sen. Bernie Sanders and Warren.But Klobuchar said her health care plan will help her win over voters.“I’ll bring those health care costs down, but I’m not going to kick 149 million Americans off their current health insurance in four years,” she said.She also touched on the challenges of running as one of the few female candidates in the presidential race.“I’m proud to be a woman candidate, but I’m not running to be the first woman. I’m actually running to have your backs and to get things done,” Klobuchar said. “My point is, yeah, it’s a higher standard, but give me that standard like so many women out there working today and I will meet it.”Copyright © 2019, ABC Audio. All rights reserved.

Jan. 6 hearings: How to watch and what to expect