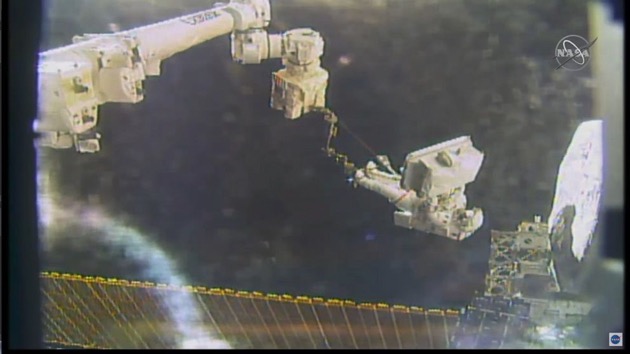 NASA(NEW YORK) — Astronauts worked to painstakingly repair a $2 billion cosmic ray detector during a space walk Monday outside the International Space Station.It’s the third in a series of repairs on the Alpha Magnetic Spectrometer (AMS), which analyzes cosmic rays for evidence of dark matter and antimatter.Astronauts Andrew Morgan of NASA, and Luca Parmitano of the European Space Agency, are replacing the cosmic ray detector’s cooling pump, which is considered the most complex repair job since upgrades were made on the Hubble Space Telescope.Parmitano is the crew member wearing the spacesuit with red stripes and helmet camera no. 11. Morgan is wearing a plain spacesuit and has camera no. 18.It’s the astronauts’ third spacewalk in nearly three weeks. During their first and second spacewalks, Morgan and Parmitano prepped and positioned materials for their upcoming repairs. During the pair’s fourth spacewalk, they’ll check their work for leaks.The spacewalk, which began at 6:31 ET, is expected to last for 7.5 hours. You can follow along on NASA TV.Copyright © 2019, ABC Audio. All rights reserved.

Putin ‘on the ropes’ as Ukrainians continue counteroffensive