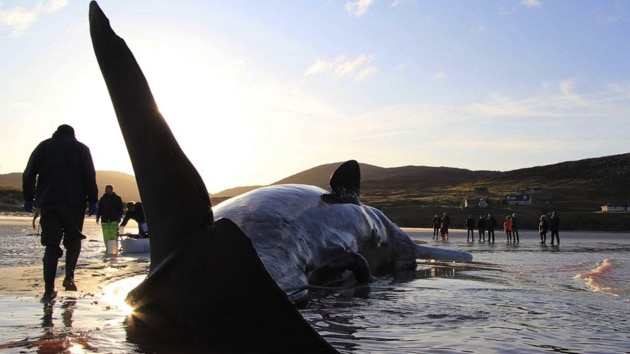 Courtesy SMASS(New York) — A sperm whale found stranded on a beach in northeast Scotland had more than 220 pounds of trash in its stomach when it died, according to the organization that found it.The whale was found on Luskentyre beach on Saturday and had been dead for 48 hours by the time workers from the Scottish Marine Animal Strandings Scheme (SMASS) got there.The debris found inside the whale included “a whole range of plastic,” including plastic cups, gloves, packing straps and tubing as well as bundles of rope and sections of netting, Scottish Marine Animal Strandings Scheme said in a Facebook post.The material was packed into the whale’s stomach “in a huge ball” and some of it had likely been ingested some time ago, according SMASS.Overall, the whale was not in poor condition, and it is unclear whether the trash contributed to its death.”This amount of plastic in the stomach is nonetheless horrific, must have compromised digestion, and serves to demonstrate, yet again, the hazards that marine litter and lost or discarded fishing gear can cause to marine life,” the organization said, describing the issue as being caused “by a whole host of human activities.”The organization believes the whale swallowed debris from both land and fishing sectors at some point between Norway and the Azores, an autonomous region of Portugal in the mid-Atlantic.The necropsy for the whale was done on the beach because it was impossible to transport the 20-ton marine animal. The marine veterinarians buried the animal once the necropsy was complete.Copyright © 2019, ABC Audio. All rights reserved.