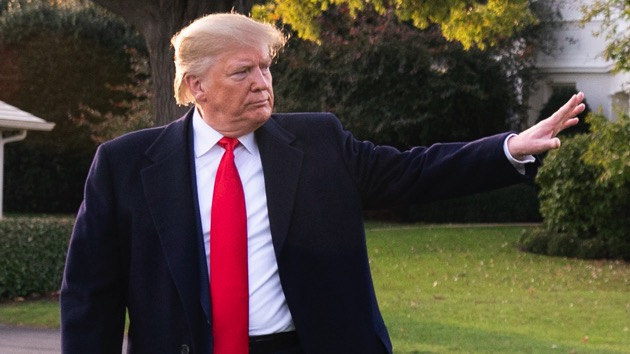 Official White House Photo by Joyce N. Boghosian(WASHINGTON) — President Donald Trump said Monday that he did not plan to send a lawyer to represent him before the House’s impeachment hearing this week “because the whole thing is a hoax.”The White House said Sunday that it did not plan to send counsel to the House Judiciary Committee’s first impeachment hearing, on Wednesday, after the committee’s chair informed Trump he could attend or send a lawyer. The president will be in London on Wednesday for a NATO summit.”The Democrats, the radical-left Democrats, the do-nothing Democrats, decided when I’m going to NATO — this was set up a year ago — that when I’m going to NATO, that was the exact time — this is one of the most important journeys that we make as president, and for them to be doing this and saying this and putting impeachment on the table, which is a hoax to start off with,” Trump said as he departed the White House Monday morning en route to the gathering.The House impeachment inquiry is this week moving into its next phase, as the House Intelligence Committee on Monday planned to transmit its findings to the House Judiciary Committee, which could draw up potential articles of impeachment.The House is looking into whether Trump held up military aid and a White House meeting to pressure Ukraine to investigate his political rivals.Ukraine’s president, Volodymyr Zelenskiy, has argued that he did not feel pressured by Trump, although he told reporters in an interview released Monday that it was not right for one strategic partner to “go blocking anything” for another partner — particularly when one is at war, as Ukraine is with Russia.”I never talked to the president from the position of a quid pro quo. That’s not my thing,” Zelenskiy told TIME and several European publications. “I don’t want us to look like beggars. But you have to understand. We’re at war. If you’re our strategic partner, then you can’t go blocking anything for us. I think that’s just about fairness. It’s not about a quid pro quo. It just goes without saying.”Trump repeatedly claimed Monday morning that Zelenskiy “said very strongly that President Trump did absolutely nothing wrong,” but at no point did Zelenskiy say that in the interview released by TIME.As the impeachment inquiry presses on, White House counsel Pat Cipollone wrote in a Sunday evening letter to House Judiciary Chairman Jerry Nadler that the White House did not plan to send a lawyer to Wednesday’s hearing because witnesses had not yet been named and that “an academic discussion with law professors does not begin to provide the President with any semblance of a fair process.”The absence of White House participation follows weeks of vocal protests from the president and Republicans in Congress, who have accused Democrats of blocking their due process rights. The Wednesday hearing will include legal experts as witnesses and is titled, “The Impeachment Inquiry into President Donald J. Trump: Constitutional Grounds for Presidential Impeachment,” as Democrats in the House decide whether to draft articles of impeachment.The committee had yet to announce Monday who the witnesses would be, but Trump said the GOP did not have enough.”The Do Nothing Democrats get 3 Constitutional lawyers for their Impeachment hoax (they will need them!), the Republicans get one,” the president tweeted Monday morning. “Oh, that sounds fair!”

The Do Nothing Democrats get 3 Constitutional lawyers for their Impeachment hoax (they will need them!), the Republicans get one. Oh, that sounds fair!