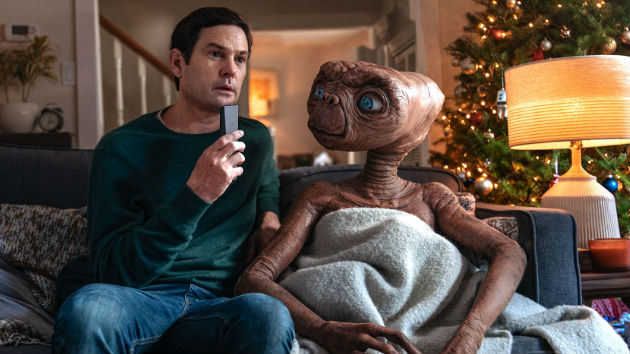 XFinity/Comcast(LOS ANGELES) — Steven Spielberg never created a sequel to one of the biggest movies of all time, 1982’s E.T. the Extra-Terrestrial, so the closest thing we’re likely to get comes in the form of a new ad for Xfinity.

The holiday-themed spot for the cable and internet company re-teams the lovable alien with Henry Thomas’ Elliott, now all grown up. “You came back!” Elliot exclaims, introducing E.T. to his family, as John Williams’ Oscar-winning score to the movie plays.

While initially freaked out by the alien, who was hiding behind a snowman, Elliot’s son and daughter soon take a shine to the bug-eyed creature, who learns “things have changed a lot” since Elliot and E.T. last hung out.

We can quibble that an alien species that has apparently mastered interstellar travel likely wouldn’t be too impressed by the Internet and VR goggles, but the charming spot is clearly more concerned with tugging the (glowing) heartstrings.

After E.T. takes Elliot’s kids on their own flying bike ride,he explains, by showing a hologram of his own family, that he’s headed home.

“Reconnect for the holidays,” a title card reads at the spot’s close.

In brief: CBS pulls ‘FBI’ finale in wake of school shooting, and more