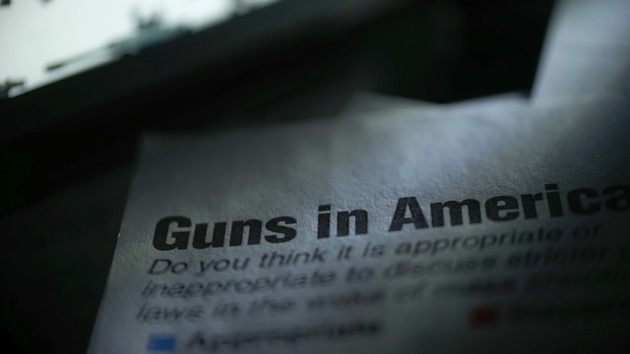 Kameleon007/iStock(NEW YORK) — As the Supreme Court hears its first firearms case since 2010 this week, new research indicates there’s one area in which strong gun laws have proved effective.Adolescents in states that require universal background checks were less likely to report carrying a firearm than teenagers living in states that rely entirely on checks during gun sales at federally licensed gun dealers, a study published Monday in the journal Pediatrics found.In states with a universal background check law, like California and New York, background checks for gun sales are required — even during private transactions, such as sales at gun shows or online, closing the so-called gun-show loophole.To track the differences between states, researchers analyzed responses to the National Youth Risk Behavior Survey from nearly 180,000 students to between 1993 and 2017.Roughly 5.8 percent of those students reported carrying a gun during the previous year, although since the survey only included students enrolled in school, that estimate is likely on the low side for adolescents who carry guns overall.Notably, 83 percent of the students who reported carrying a gun were from states that did not have universal background checks in place. Only 17 percent were from states with a universal background check law.Students who said they were threatened or injured by a weapon on school property were four times more likely to carry a gun than their peers who hadn’t had those experiences.As for why more high school students are carrying guns in states without universal background checks, stricter states might sell fewer guns to ineligible buyers — such as underage people — ultimately reducing adolescents’ access to guns, Teresa Bell, coauthor of the new study, hypothesized.It’s also possible that there are latent differences between states, explained Bell, an assistant professor of surgery at Indiana University School of Medicine. For example, students’ attitudes about carrying guns, and potentially their future behavior, might change when background check laws are passed in the wake of a high-profile school shooting.The researchers set out to investigate whether the National Instant Criminal Background Check System, or NICS — which vets prospective gun buyers for disqualifying criteria, such as prior felony convictions, and which went online in 1998 — would stop teens from carrying guns.Their finding was that NICS alone didn’t drive down teen gun carrying — but states’ independent gun laws didn’t prove effective until NICS was in place.Ultimately, NICS combined with state universal background checks reduced adolescent gun carrying by 25 percent, the researchers found.”This is consistent with a growing body of literature that it is a complex of regulations that are needed to reduce guns and their consequences,” said Dr. Sandro Galea, an epidemiologist and dean at the Boston University School of Public Health, who was not involved in the study.”Showing that NICS and UBC together make the biggest difference adds further evidence that states like [Massachusetts], for example, have been able to achieve lower firearm mortality rates by having in place multiple policies that act together to reduce casual gun carrying and its consequences,” Galea said.While state and federal background checks seem to have a trickle-down effect for teenagers, those laws are ultimately aimed at adults, meaning there may be more targeted ways to reduce teen gun carrying.Educating gun owners who care for teenagers about safe storage practices is a prime area to explore for future interventions, according to Bell. Another is helping kids feel safe at school.”Providing support to students who are threatened or injured at school could have large impacts on reducing teen gun-carrying,” she said.Copyright © 2019, ABC Audio. All rights reserved.