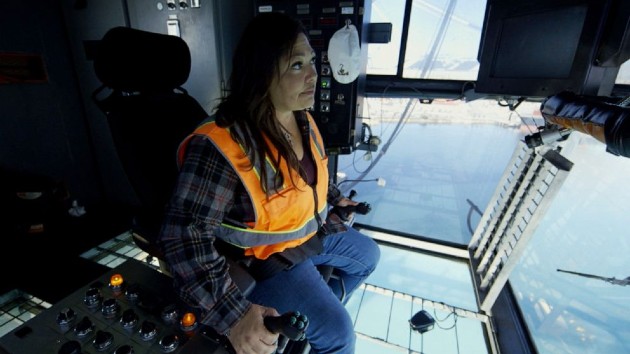 ABC News(NEW YORK) — Sitting on her perch 160 feet above the Port of Los Angeles, Maria Adame gently maneuvers her crane as she offloads containers weighing over 50,000 pounds, full of everyday goods that just made the trek across the Pacific Ocean.”Everybody looks so small down there,” Adame said. “You feel closer to God.”Adame, the West Coast’s only female crane instructor and a longshoreman, has been working in the ports since the age of 22 when she was a single mother of two.”I used to walk there with my baby in the stroller. I went for six months straight every day,” she said.Back then, part-time employees would put their driver’s licenses in a box, hoping their names would be called for the day.”They’d shake it up and if they pulled your driver’s license, then you know, you were picked to go to work,” Adame said. “My first job was a forklift job.”Adame remembers the struggle of being only one of a few women on the waterfront.

“It was almost like ‘don’t tell me I can’t, because I will,"” she said, adding, “You’re up against quite a bit. You have to learn how to not just be physically strong because there was a lot of labor involved you know, just the mental part of it.”A longshoreman’s main job is to load and unload the cargo ships that are bringing in electronics, airplane parts, clothes and other household goods from all over the world. They work in a variety of roles on the docks from forklift operator to driver to crane operator.The Port of Los Angeles and Long Beach, where Adame works, are two of the busiest container ports in the U.S., moving about 9.5 million containers in 2018.The job is not for the faint of heart.

“If you get hurt down here, you’re going to lose. Probably lose a limb or you could possibly lose your life,” Adame warned. And “not really small injuries, usually pretty big,” she explained.She credits her male colleagues for helping her get where she is today.

“I got really lucky, the partner that they set me up with was very kind to me and he taught me how to operate the machine,” she said.However, Adame believes women have the magic touch.”I don’t know if it’s because we are good at multitasking or we’re mothers and we just know how to do these things … women, we make great, great crane operators,” she explained.When looking back, Adame said it brings tears to her eyes to see how far she’s come but recognizes the struggle was worth it.”It’s a big accomplishment to be able to climb the ladder and make it,” she said. Copyright © 2019, ABC Audio. All rights reserved.