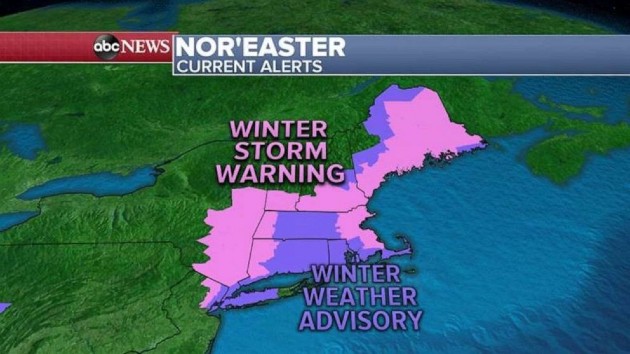 ABC News(NEW YORK) — Eight Northeast states from New Jersey to Maine are under snow alerts Tuesday morning. Some of these alerts, however, will expire around 7 a.m. as the storm moves north into northern New England.On Tuesday morning, the nor’easter continues to produce snow in New England from Connecticut to Maine with gusty winds from Philadelphia to New York City and Boston. On Tuesday evening, the nor’easter will begin moving into Canada taking the snow with it, with just lingering snow showers in northern Maine from Bangor to Caribou. It will continue to be blustery and chilly for most of the Northeast Tuesday with gusty winds from 20 to 40 mph.Additional snowfall of up to 3 inches locally is possible around Boston Tuesday morning. The rest of the snow will fall mostly in Maine where another half a foot of snow is possible.We are watching a new storm system that could bring heavy rain and snow to southern California, from Los Angeles and San Diego into the Sierra Nevada mountains Tuesday night into Wednesday morning. A Winter Storm Watch has been issued for Sierra Nevada for Tuesday night. On Tuesday, the storm will remain off shore and it will be mostly dry for Los Angeles and San Diego. By Tuesday night into Wednesday morning, the storm will move onshore in California with heavy rain from Los Angeles to San Diego. Minor flash flooding is possible in Southern California. Locally, up to 3 inches of rain is possible just north of Los Angeles with 1 to 2 inches of rain expected in Los Angeles and San Diego. In the mountains from Sierra Nevada to the Rockies, up to 1 foot of snow is expected.