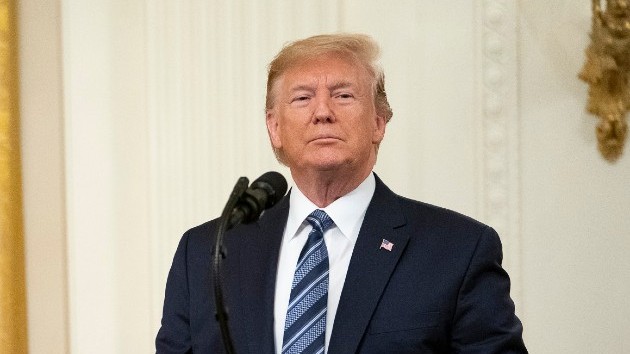 Official White House Photo by Tia Dufour(LONDON) — President Donald Trump took aim at fellow NATO leader President Emmanuel Macron of France ahead of a summit in London on Tuesday, branding the French president’s comments that the alliance was experiencing “brain death,” a “very, very nasty” and “insulting statement.” Trump spoke to reporters during an appearance with NATO Secretary General Jens Stoltenberg at the U.S. ambassador’s residence in London, ahead of a summit commemorating the 70th anniversary of the transatlantic alliance. “You can’t just go around making statements like that about NATO, it’s very disrespectful,” Trump said, glazing over the fact that he himself once called NATO “obsolete.” “Nobody needs [NATO] more than France,” Trump said, “if you just look back over the last long period of time,” in an apparent reference to World War I and World War II.The president’s criticisms of Macron come just hours before he is set to sit down with the French leader in what will be closely watched bilateral meeting. And just Monday night, the Trump administration announced that it is considering imposing $2.4 billion in tariffs on France in retaliation for that country’s digital tax that targeted U.S. internet companies, saying he wants to be the one to tax those companies.“I’m not in love with those companies,” Trump said. “If anybody is going to take advantage of our companies it’s going to be us.” France has threatened a forceful response if the Trump administration follows through on a proposal to hit the country’s cheese, Champagne, handbags and other products with tariffs of up to 100%. Last month, in an interview with The Economist magazine, Macron had urged NATO to “wake up,” warning that member states were failing to cooperate on key issues and calling into question the future of the alliance.Trump has repeatedly chastised NATO allies for not contributing enough financially to the alliance. All 29 NATO member states have committed to increase their defense spending to 2% of GDP by 2024, but NATO data estimates that only seven members — including the U.S. — are estimated to meet the spending target this year. During the freewheeling appearance, Trump also touched on a number of other topics, including the ongoing impeachment inquiry in Washington. Responding to the suggestion that the probe may overshadow his visit, he said: “Does it cast a cloud? If it does, then the Democrats have done a great disservice to the country.”The president took a diplomatic approach when questioned about the general election in the summit’s host country, Britain, due to take place Dec. 12.

“I stay out of it,” he said, adding that he could “work with anybody,” who came to power after the vote. Trump has in the past been a vocal support of British Prime Minister Boris Johnson, once dubbing him “Britain Trump,” and has criticized opposition Labour Party leader Jeremy Corbyn, saying he would be “so bad” for the country.