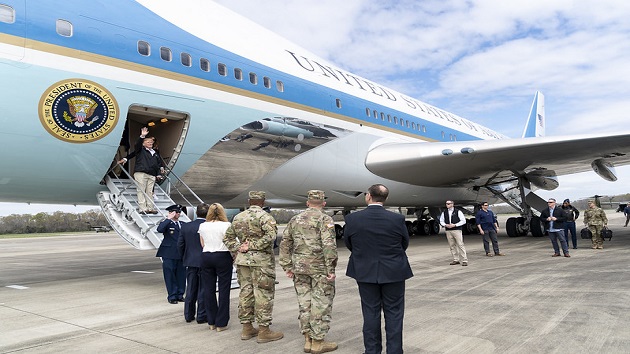 Official White House Photo by Shealah Craighead(WASHINGTON) — Georgia Gov. Brian Kemp announced Wednesday that he’s appointing financial executive and Republican donor Kelly Loeffler to the state’s soon-to-be-vacant Senate seat. “Today, I’m proud to announce that conservative businesswoman and political outsider Kelly Loeffler will be Georgia’s next U.S. Senator,” Kemp said, standing next to Loeffler, in a press conference in Atlanta. “From the farm to the New York Stock Exchange, Kelly has really lived the American dream, and I’m confident that she will work every single day to keep that dream alive for our children, grandchildren and for the generations of Georgians and Americans to come.”Kemp added, “Like our president, Kelly is ready to take on the status quo, the politically correct and the special interests. She knows that Washington is fundamentally broken. She knows that we need to drain the swamp.”Loeffler, who will be the first Republican woman to represent Georgia in the Senate, said she was “humbled” to be chosen, but added that she has “a lot of work to do to earn the trust and support of my fellow Georgians.” She advocated strongly for Trump’s agenda and against the “socialist gang in Washington,” which she said includes Democratic presidential candidates Sens. Bernie Sanders of Vermont and Elizabeth Warren of Massachusetts.”So here’s what folks are going to find out about me: I’m a lifelong conservative, pro-Second Amendment, pro-Trump, pro-military and pro-wall,” she said to applause. “I make no apologies for my conservative values and I look forward to supporting President Trump’s conservative judges. I am strongly pro-life.”She added, “Not every strong American woman is a liberal. Many of us are conservatives and proud of it.”Over 500 Georgians applied for the seat. Kemp chose Loeffler over Rep. Doug Collins, the ranking member of the House Intelligence Committee and a fierce defender of President Donald Trump’s in the ongoing impeachment saga. The president had called Kemp multiple times over the past few weeks to urge him to tap Collins, sources familiar with the effort previously told ABC News, but this past weekend, Kemp began telling lawmakers he’d decided on Loeffler, according to a source with direct knowledge of the decision.Just Monday, Trump tweeted support for Collins, writing that he did a “great job… over the weekend in representing the Republican Party, and myself, against the Impeachment Hoax!”Loeffler will join the Senate after three-term Sen. Johnny Isakson formally retires on Dec. 31.In a press release Wednesday, Isakson said serving in the Senate was “the honor of a lifetime” and congratulated Loeffler on her appointment.”Kelly’s business experience and acumen will be an asset to Georgia and the Senate. The same tireless work ethic that has helped her succeed in business will also help her succeed in serving Georgians and our nation,” he said.In order to finish out his six-year term, though, she’ll have to win a special election to be held on Nov. 3.When she runs in the special election, she could help regain support among suburban female voters who have drifted from the GOP in recent cycles, inching historically red Georgia into battleground territory.After the close 2018 gubernatorial race between Kemp and Democratic challenger Stacey Abrams, former House Speaker Newt Gingrich, of Georgia, said at a Washington Examiner summit, “(Kemp) spent almost no energy trying to reach suburban and exurban women and he came close to losing.”But she could still face a primary challenge from Collins, who on Sunday, didn’t rule out running in the special election. In an interview on Fox News, when pressed by the host about potentially running against Loeffler, Collins said, “Let’s see what the governor does first… if he does (choose Loeffler), then that’ll be a decision we have to make at that point.”In a statement to ABC News Wednesday, Collins said he respected Kemp’s decision and congratulated Loeffler on her appointment. “I appreciate the support I have received from the president and many others, and right now, my primary focus is defending our president against partisan impeachment attacks,” he said.On Tuesday, Senate Majority Leader Mitch McConnell threw his and his Republican colleagues’ support behind Loeffler, calling her a “terrific appointment” for Georgia Senate.”She will be an incumbent Republican senator and we will all be behind her,” McConnell told reporters on Capitol Hill. “I’m going to be behind her, and I’m confident that someone we’re working with every day is going to enjoy almost total support within the Republican Senate conference.”Loeffler is the co-founder and CEO of Bakkt, a Bitcoin futures trading platform, and a co-owner and co-chair of the WNBA’s Atlanta Dream team, and she and her husband, chairman and CEO of Intercontinental Exchange and chairman of the New York Stock Exchange Jeffrey Sprecher, are big Republican donors.Together, they gave more than $1.5 million to the super PAC backing then-Republican presidential candidate Mitt Romney’s 2012 campaign, according to Federal Election Commission filings. And more recently, according to FEC filings, they each gave a $35,500 contribution, the maximum amount per year, to the Republican National Committee, plus an additional $39,500 donation each to the RNC’s convention account.In her application, which was submitted just ahead of the deadline, Loeffler called herself a “lifelong Republican,” and said she’ll “stand with President Trump, Senator David Perdue and (Kemp) to Keep America Great.”But despite pledging to stand with the president, Kemp faced backlash from some Republicans as reports broke that he would pick Loeffler. Rep. Matt Gaetz of Florida, one of the president’s strongest allies on the Hill, on Friday called out the governor on Twitter, saying that appointing Collins would be the way to support Trump and his agenda.”If you substitute your judgement for the President’s, maybe you need a primary in 2022,” Gaetz wrote. “Let’s see if you can win one (without) Trump.”Kemp’s press secretary, Cody Hall, pushed back against Gaetz, saying he’s not the governor.”A record number of Georgians elected @GovKemp to serve – and he’s doing it with sky-high approval numbers,” he wrote.