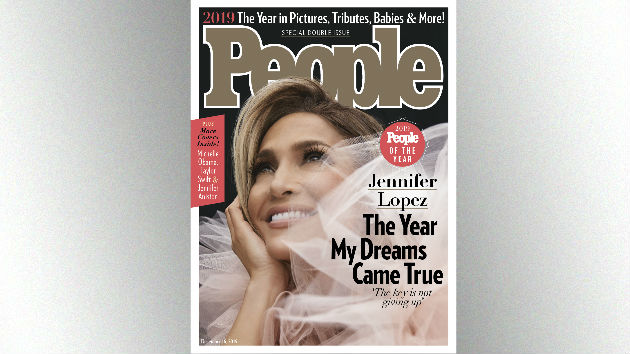 People/Miller Mobley(LOS ANGELES) — This year, People magazine couldn’t choose just one star for the cover of its annual “People of the Year” double issue — so it chose four.

Jennifer Lopez, Jennifer Aniston, Michelle Obama and Taylor Swift were each singled out with their own covers.

“Our People of the Year issue celebrates the stars who have made an impact on our culture,” notes People Editor-in-Chief Dan Wakeford. “I wasn’t surprised that we ended up with an all-female foursome — this year has been dominated by strong women.”

Lopez “ticked every possible box as she turned 50 this year,” Wakeford says. “…Oscar buzz for Hustlers, which she co-produced; a blockbuster music tour; a beautiful family; an upcoming Super Bowl appearance…”

In the article, Lopez comments she’d also like to have more children. “I don’t know if it’s in God’s plan, but I’d like to try,” says the multi-hyphenate, who is engaged to former New York Yankee Alex Rodriguez.

Wakeford says Aniston “summed up that zeitgeist on The Morning Show — which she co-produced for Apple TV+ — when [her character] told a roomful of men, ‘You don’t have the power anymore…”

The editor says, “2019 was arguably the year Taylor Swift found her voice. She stood up to protect her creative rights, spoke out for what she believed in…and…her album Lover became 2019’s bestselling record in just one week. Truly epic.”

Former first lady Michelle Obama was heralded for her charity work, and for becoming “the bestselling memoirist of all time,” and winning a Grammy for the audio version of her book Becoming.

“The accomplishments are varied but have one thing in common: They came when these women got to know themselves better and focused their work on what makes them happy,” Wakeford declared.