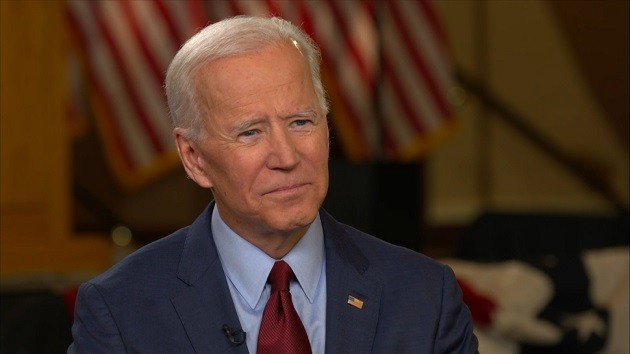 ABC News(WASHINGTON) — Former Vice President Joe Biden is responding unequivocally to a top White House official who said Wednesday that President Donald Trump is demanding a full Senate trial, featuring live witnesses, if and when the House sends over articles of impeachment: He does not plan to attend voluntarily.”No, I’m not going to let them take their eye off the ball,” Biden said outside a campaign event in Iowa Falls, Iowa, on Wednesday afternoon. “The president is the one who has committed impeachable crimes, and I’m not going to let him divert from that. I’m not going to let anyone divert from that.”Eric Ueland, White House legislative affairs director, delivered Trump’s demands to reporters on Capitol Hill earlier in the day.”We believe very strongly, given the fatally flawed process in the House, that if they were to elect against our better advice to provide articles of impeachment — send articles to the Senate — that we need witnesses as part of our trial and full defense of the president on the facts,” Ueland said.Ueland gaggled with a handful of reporters just steps away from the Senate chamber for roughly 20 minutes following a closed-door lunch meeting with Senate Republicans on impeachment strategy.Also in attendance during the luncheon: White House counsel Pat Cipollone, former Florida Attorney General Pam Bondi and former Treasury spokesman Tony Sayegh — the latter two have both been charged with handling the administration’s communication strategy on impeachment.”The underlying impeachment rules of the Senate afford the president a full suite of rights to argue his case on the facts and on the merits,” Ueland said. “That’s why we believe quite strongly that in order to make the president’s whole case in contradiction to a partisan process which doesn’t allow him to make his full case, that we need both a full trial and the opportunity to call witnesses and work a trial over here on the Senate floor.”He suggested the White House wants live witnesses as part of the trial, instead of relying on videotaped depositions like the ones entered into evidence during former President Bill Clinton’s impeachment trial in 1999. Ueland did not, however, provide details as to who those witnesses might be.”The president wants his case made fully in the Senate with a full trial and that’s a point we’re going to make consistently,” Ueland said.Republican senators coming out of the meeting offered no additional insights on the process of a potential trial, with many saying they are simply waiting to see what the House ends up doing.”It was an opportunity for our members to ask questions, for some to offer comments, but you know again it’s a fluid process, there’s a lot of uncertainty surrounding this,” South Dakota Sen. John Thune said.GOP Sen. Ted Cruz of Texas called the discussion “free-ranging” and broad in scope.”There was nothing designed in my view to sway anybody one way or the other To be honest, it was really not very — I hate to say this because, you know I’ve been to the White House for the lunch meetings — it’s pretty much the same stuff,” North Dakota Sen. Kevin Cramer said.”There was nothing new or a revelation, just a discussion of what might occur,” Indiana Sen. Mike Braun said in agreement.Missouri Sen. Roy Blunt gave a small glimpse into what the proposed strategy will be for Senate Republicans.”Well, the strategy is what the leader talked about the other day: when it gets to the Senate he will decide what the calendar looks like and how much willingness there is to have an agreement, a bipartisan agreement, and if not, how much willingness there is to have 51 votes to either amend or move forward with the current Senate rules,” Blunt said.He continued: “I do think that the president’s counsel said enough times — and he wanted to be sure that we heard it — that even though they’re talking about what they may do if it comes here – they clearly don’t believe, based on what’s happened so far, that the House should send it here.”The Republican-controlled Senate also released its 2020 calendar without anything scheduled for the month of January due to the uncertainty surrounding the impeachment trial.”The only thing I know for sure is that nobody knows what we’re doing in January yet,” Cramer said. “I think it’s just prudent planning.”January will be a little on the fly,” Thune said.Blunt weighed in as well, saying “often there’s a break around Martin Luther King Day and other things that may very well not happen if we’re involved in the impeachment process.”Cramer added, “Worst case scenario, let’s hope.”While Senate Republicans met with White House officials to discuss strategy, Senate Democrats said they are preparing for a potential trial, too.A source close to Senate Minority Leader Chuck Schumer said the senator gave a presentation during their caucus lunch “confined to the mechanics of a potential Senate trial because articles have not been drafted.””As a part of Schumer’s presentation, members were shown video clips from the 1999 trial to familiarize themselves with the process,” the aide said.The aide added that only seven of the current 47 Senate Democrats were in the Senate during Clinton’s 1999 trial.Copyright © 2019, ABC Audio. All rights reserved.