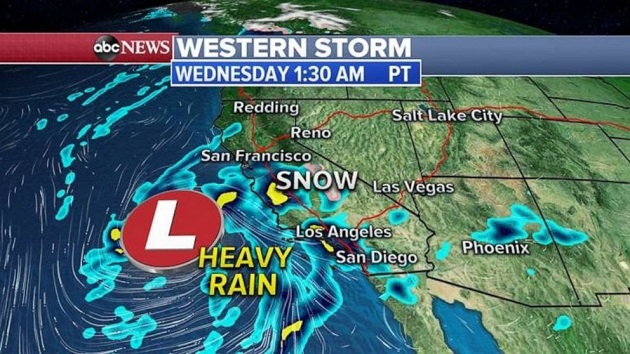 ABC News(NEW YORK) — A pair of storms will bring a one-two punch to the West starting Wednesday.Storm number one is already moving into California Wednesday morning, bringing heavy rain to Los Angeles and San Francisco with snow falling in the Sierra Nevada mountains.Flash flood watches have been issued from Los Angeles to San Diego Wednesday morning for heavy rain and a threat of flooding that could create mudslides.On Wednesday afternoon and evening, heavy rain will move into Nevada and Northern Arizona with heavy mountain snow from the Sierra Nevada into the Rockies.Total rainfall could reach 3” of rain in Southern California, and snow could pile up as high as 18” in the Sierra Nevada and 6-12” in the Rockies.And even though no flood alerts have been issued for the San Francisco Bay area Wednesday morning, any additional rain there could create mudslides due to the very saturated ground from last week’s rain.After this storm is gone, a brand new storm that’s even stronger will move into the West Coast Friday into the weekend, with several more inches of rain for Northern California and several feet of snow in the Sierra Nevada range.A winter storm watch has already been issued for Northern California. Copyright © 2019, ABC Audio. All rights reserved.