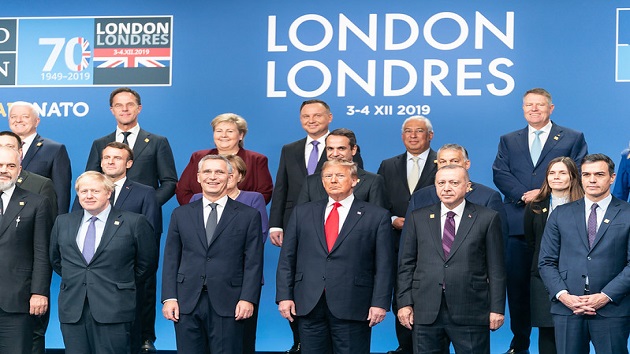 Official White House Photo by Shealah Craighead(LONDON) — The 29-member bloc of NATO gathered in London to mark 70 years since its founding in 1949, a time of unease in Europe over the expansion of the Soviet Union after World War II.Now the military alliance, originally made of 12 members, stretches from the U.S. across the Atlantic, right up to the border with Russia.World leaders put on a show of unity at Buckingham Palace in central London on Tuesday, posing for the traditional “family photograph,” with host Queen Elizabeth center stage, along with NATO Secretary General Jens Stoltenberg and U.K. Prime Minister Boris Johnson on either side.But amid the smiles, political fault lines and tensions underscoring disparate elements of the alliance was spilling out and threatening to overshadow the summit.The ‘brain-death’ of NATOTensions between world leaders has been magnified during Turkey’s incursion against the Kurds in Northern Syria in early October.After a phone call with Turkish President Recep Tayyip Erdogan, U.S. President Donald Trump announced on Oct. 6 that Turkey was set to invade Syria and all U.S. forces were to be moved from the “immediate area.”Turkey considers Turkish forces — namely the PKK and its Syrian counterpart the YPG — as terrorist organizations.British and French special forces were deployed in northern Syria with the Kurds — and the announcement was met with initial confusion in Europe, as it became apparent that they had not been given advance warning.French President Emmanuel Macron, in an hour-long interview with The Economist newspaper in late October, warned that Europe could no longer depend on America to defend its NATO allies, saying the alliance was suffering a “brain death” over the lack of coordination between member states.In a shift of position, President Trump, who in his 2016 presidential campaign railed against NATO as “obsolete” and threatened U.S. funding, rebuked Macron as “very, very nasty” for his comments.In a bilateral meeting with Secretary General Jens Stoltenberg, Trump said “You just can’t go around making statements like that about NATO.”Macron expressed continued concern on Tuesday over NATO’s role in the conflict in Turkey.“When I look at Turkey, they are now fighting against those who fought with us shoulder to shoulder against ISIS,” Macron said ahead of the summit.The threat in the EastAlso at odds with European members is Turkey’s recent acquisition this summer of the Russian S-400 air defense system. The Europeans are concerned that having a Russian weapons system in Europe could make NATO military hardware — such as stealth jets manufactured by U.S. defense firm Lockheed Martin — susceptible to Russian military intelligence.Just over a week before the NATO summit, Turkey began testing its Russian-purchased defense system with F-16 fighter jets.As a response, the U.S. kicked Turkey off its F-35 fighter jet program, and warned of sanctions if it activated the system.Secretary of State Mike Pompeo said last week’s tests were “concerning” but that Washington and Ankara were working to resolve the issue.”We are still talking to the Turks, still trying to figure out our way through this thing,” Pompeo said.President Macron hinted on Tuesday that Turkey’s purchase of Russian hardware was at odds with being a member of NATO. “Technically it is not possible,” he said.The looming threat from Russia remained high on the agenda. Russian President Vladimir Putin, speaking ahead of the summit, said that “NATO’s expansion and the development of its military infrastructure near the Russian border poses a potential threat to our national security.”

#Putin: NATO’s expansion, the development of its military infrastructure near the Russian border, pose a potential threat to our national security. The technical overhaul of the Russian Armed Forces will remain the focus of our closest attention✅ https://t.co/pm6wmqT2PL #NATO70 pic.twitter.com/j0JQuCpQ66

“Therefore,” he added, “I would like to note the technical overhaul of the Russian Armed Forces has been and will remain the focus of our closest attention.”NATO states on the European frontier with Russia have the most unease about Russian aggression. Last month, Reuters reported that Erdogan was blocking a NATO defense plan for the Baltics and Poland unless NATO agreed to formally class Syria’s Kurdish fighters as terrorists — a move that has been rejected by France and the U.S.But the secretary general dismissed questions on whether the alliance was fracturing, saying “Disagreements will always attract more attention than when we agree.””We are 29 different counties, from both sides of the Atlantic, with different history, different geography, and different political parties in power. So of course there are differences. Anything else would be very strange,” Stoltengerg said on Wednesday.He added that “the strength of NATO is that we have always been able to overcome these differences.”Copyright © 2019, ABC Audio. All rights reserved.