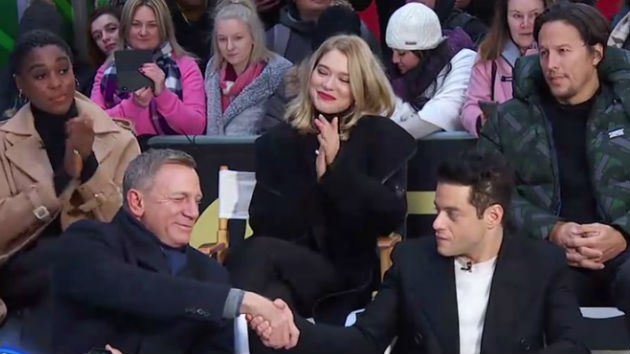 ABC(LOS ANGELES) — Daniel Craig is back in action as 007 in his fifth and final James Bond film, and the No Time to Die cast took a chilly outdoor appearance after Good Morning America’s debut of the high-octane trailer to remind Craig what a lasting impression he’s made.Wednesday morning, he said of suiting up in his tailor-made tux once again, “If you can’t get excited about this job, I don’t know what else there is. I think the biggest surprise really was how much I enjoyed it and how much I still get a kick out of it.””As on every Bond, just the most extraordinary, talented people…get involved,” he added.Co-star Rami Malek, who plays the villain Safin, said that although the trailer didn’t reveal much more than a first glimpse of his eerie white-masked face, Malek says he’s a “nasty piece of work.”About his villain’s appearance, he laughed, “I can tell you nothing about that.” The Bohemian Rhapsody Oscar winner did allow Safin is “a very unnerving character.””I get to face off with [Daniel] in a battle of epic proportions. It’s a very formidable, nasty human being,” Malek said.To Craig, he noted, “It’s been a pleasure to work with you and you are as timeless as these films are — I think you’ve done a magnificent job and I think it’s been a gift for all of us to have worked with you.””If it wasn’t so cold you’d see me blush,” the longtime Bond star replied, to cheers.