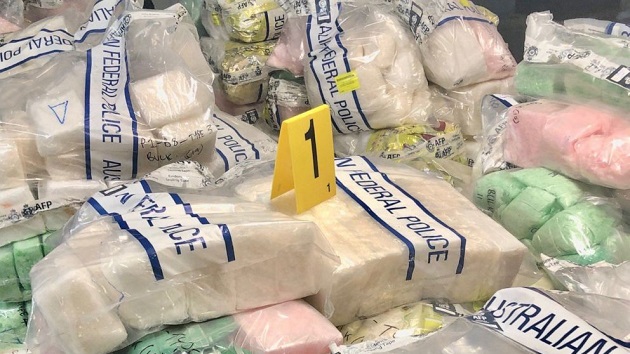 Australian Federal Police(MELBOURNE, Australia) — Australian authorities have seized the country’s largest methamphetamine lot, which had a price tag of $820 million and weighed nearly 3,200 pounds, officials said.The Australian Federal Police and Australian Border Force made the bust on Wednesday, the two agencies said in a joint statement. The methamphetamine was worth $1.197 billion in Australian dollars (or $820 million in U.S. currency). The major seizure also included about 81 pounds of heroin that was worth $18.5 million in Australian dollars (or $12.62 million in U.S. dollars) — marking the country’s largest heroin seizure since 2017, the statement read.The drugs allegedly came from Bangkok, Thailand, and were stashed in vacuum-sealed packages, which were hidden in stereo speakers.Authorities said they were discovered after executing a series of search warrants throughout properties in Melbourne.Three people have been arrested in relation to the bust, police said.Two men, aged 37 and 38, and one woman, 37, have each been charged with one count of importing methamphetamine and one count of importing heroin.They could face life in prison if convicted.The country’s deputy commissioner for police, Neil Gaughan, applauded his team and the border force for their efforts.”This joint operation has identified and removed serious vulnerabilities from the Melbourne waterfront,” Gaughan said in a statement.The accused will appear in Melbourne Magistrates’ Court on Thursday.Copyright © 2019, ABC Audio. All rights reserved.