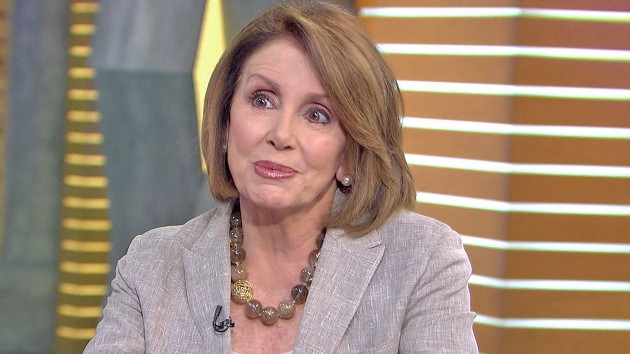 ABC News(WASHINGTON) — In a striking moment Thursday, House Speaker Nancy Pelosi reacted angrily to a reporter who asked if she hated President Donald Trump, shortly after she announced the House would draw up articles of impeachment against the president. “I don’t hate anybody,” Pelosi snapped as she pointed and shook a finger at the reporter, James Rosen, a correspondent for Sinclair Broadcast Group who shouted the question as she was leaving her weekly press conference.Rosen said he was referring to comments from Rep. Doug Collins, R-Ga., and other Republicans on the House Judiciary Committee from Wednesday’s impeachment hearing with constitutional law scholars.“As a Catholic I resent your using the word hate in the sentence that addresses me. I don’t hate anyone. I was raised in a way that is a heart full of love and always pray for the president,” she said. “I still pray for the president. I pray for the president all the time. So don’t mess with me when it comes to words like that.”Democrats’ three witnesses in Wednesday’s hearing said Trump abused his office in seeking to pressure Ukraine to launch political investigations. Jonathan Turley, a George Washington University Law School professor and Republicans’ sole witness, argued that Democrats were rushing to impeach Trump prematurely and should continue to investigate and litigate disputes with the executive branch over evidence and testimony in court.Pelosi said that Trump, in spurning congressional subpoenas and directing current and former aides not to cooperate with House committees, has obstructed their investigations.

“We’re not going to be accomplices to it,” she said.The California Democrat, who had previously warned that impeachment could polarize and divide the country, defended the decision Thursday to move forward.“He’s the one who is dividing the country on this. We’re honoring our oaths of office,” she said.“I think the president is a coward when it comes to helping our kids who are afraid of gun violence. I think he is cruel when he doesn’t deal with helping our dreamers of which we’re very proud. I think he is in denial about the climate crisis,” she said.“However, that is about the election,” she added. “This is about the Constitution of the United States and the facts that lead to the president’s violation of his oath of office.”On Monday, the House Judiciary Committee will meet to hear evidence presented by The House Intelligence Committee staff that compiled the 300-page Ukraine report. It’s not clear if the White House will participate in the upcoming hearing.