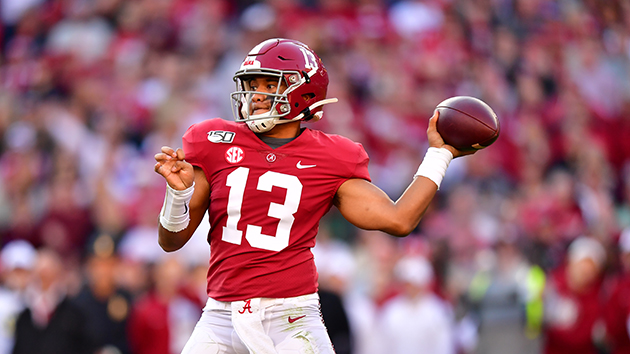 Photo by Phil Ellsworth / ESPN Images(TUSCALOOSA, Ala.) — Alabama quarterback Tua Tagovailoa says he would be likely to enter the NFL Draft if he gets assurances that he’d be chosen in the first half of the first round.Tagovailoa was a Heisman Trophy contender and a potential first overall draft pick until he suffered a season-ending hip injury last month. That injury dropped him from second to thirteenth in ESPN’s Todd McShay’s latest draft rankings.The NFL College Advisory Committee provides feedback to underclassmen interested in entering their names for the draft. They only provide three grades: potential first-round pick, second-round pick, or neither.Tagovailoa could solicit feedback from other sources, however. And if he were told he’d be a top-15 pick, “that’d be tough to pass up,” he said. “But there’s a lot more to it than that in some aspects.”The junior says he has spoken to Alabama head coach Nick saban about his future. But, Tagovailoa adds, there is no timetable yet for his decision. “It’s something I still need to sit down and talk to my family about,” he explained.Tagovailoa says doctors have told him to expect 100 percent health as far as football activities go. But, he says, he won’t be able to move the hip in certain directions — specifically an inward motion that he says isn’t key to running. Alabama team orthopedic surgeon Lyle Cain told ESPN that he expects the quarterback to return to action within three months of surgery. Tagovailoa could be throwing a football again by Spring 2020. Copyright © 2019, ABC Audio. All rights reserved.