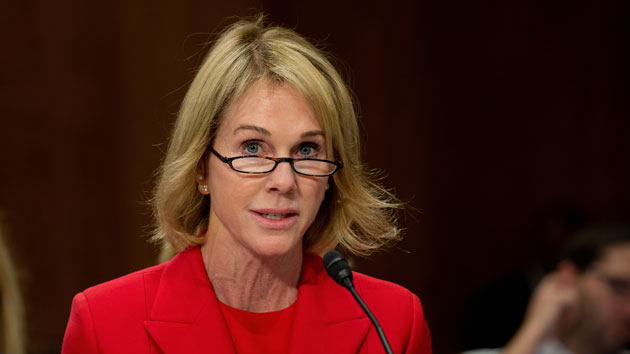 Tasos Katopodis(NEW YORK) — As the U.S. assumes the rotating presidency of the U.N. Security Council for December, U.S. Ambassador to the United Nations Kelly Craft said Friday she would focus members on “credibility through assessment and resolution.””We do face a credibility problem in the eyes of the world when we’re talking without acting, but at the same time, we argue that we are essential to global peace,” she said at a news conference at the U.N. she held to explain her goals. “We have to prove that by our actions within the council.”Craft, a longtime GOP activist from Kentucky, who along with her husband is a major donor to Trump and other Republicans, was the U.S. ambassador to Canada before being confirmed U.N. ambassador in a 56-34 vote in July, but not before several lawmakers questioned her experience.On Friday, she outlined the council’s schedule for December — from meetings on Afghanistan, Yemen and South Sudan to inviting members on a first-of-its-kind overnight retreat in Kentucky. But one item she said the U.S. has not yet decided on is whether to hold a council meeting on Dec. 10 to specifically address human rights abuses in North Korea.”I care about human rights around the world,” Craft said, fielding several questions on North Korea. “I can promise you that the council is very unified in the fact that we are all very concerned. It doesn’t matter whether it’s Christmas or it’s tomorrow or it’s February.”Craft’s remarks come ahead of North Korean ruler Kim Jong Un’s end-of-the-year deadline to President Donald Trump to show more flexibility in nuclear talks — or else it will end all diplomacy — and on the heels of several warnings by North Korean officials directed at the U.S. this week.On Wednesday, North Korea’s U.N. ambassador Kim Song warned the council in a letter that a discussion of the country’s human rights situation would be a “serious provocation” and Pyongyang would “respond strongly.””I have read the letter. We care about human rights,” Craft responded, “None of us can stand by and allow human rights to be abused.”At least eight members of the 15-member council support a meeting on North Korea — but Craft emphasized that the council does stand united in its concern over the country’s ballistic missile program.Craft also stressed U.S. support for the council’s mission to find a political solution to the crisis in Syria as opposed to a military one. The council has scheduled meetings on Dec. 19 and 20, the final day of the U.S. presidency, devoted to Syria.”Over the next 12 months, the council’s best efforts should be directed toward keeping the entry points through which the humanitarian agencies is delivered. This is essential to creating peace for the people in Syria,” said Craft, referring to a U.N.-mandated cross-border aid delivery scheme operating from Turkey which is set to expire in January. “There is no Plan B, so this has to happen. There is no alternative.”When asked about reports of Turkey engaging in ethnic cleansing of the Kurds in Syria, Craft avoided criticizing the Turkish intervention. Instead, she thanked Turkey for opening a new fifth crossing to deliver humanitarian aid to the Syrian people and repeated that her primary concern is with people of Syria.”We support Turkey adding the fifth border,” she said. “That is very important in order to access the growing number of humanitarian needs.”Regarding Iran, Craft said that the country’s problems of instability are due to the actions of oppressive leadership and blamed the government for supplying weapons to Houthi rebels in Yemen. Subsequently, she said the U.S. will continue its maximum pressure campaign on Iran and hold a session on Dec. 19 related to its non-proliferation and the implementation of Resolution 2231.”Iran has not changed its behavior, as it is interfering in Yemen, Syria and Iraq. What concerns me is the well-being of the Iranian people and the rejection of the Iranian state’s actions to offend its people and the peoples of the region,” she said. “I confirm that we have many means and we will use these means with Iran.”And in a first for the council, Craft confirmed she will host members in her home state of Kentucky next weekend. Activities on their agenda include dining at the governor’s mansion, attending a University of Kentucky basketball game and bottling bourbon.Craft echoed the sentiments of her boss when asked about the potential for the U.S. to help cover outstanding debts of other nations.”Whether it be NATO paying their two percent or whether it be the U.N. burden sharing, we are the number one donor, the number one contributor both to the NATO and the U.N., she said. “We expect countries to pay their fair share.”She also said Israel has “no better friend that Kelly Craft” and vowed to continue the efforts of Trump’s first ambassador to the U.N., Nikki Haley, by fighting against anti-Israel resolutions.”I’m not going to accept the status quo where Israel is the subject or relentless and one-sided criticism,” she added on Friday. “That is not okay with me.”One of the first events under Craft’s Security Council presidency was a group visit to the White House and working lunch with Trump on Thursday.Craft said she promised their work would conclude by Dec. 20, so they can all can return home for the holidays. Copyright © 2019, ABC Audio. All rights reserved.

How a false claim about Iran executions spread online