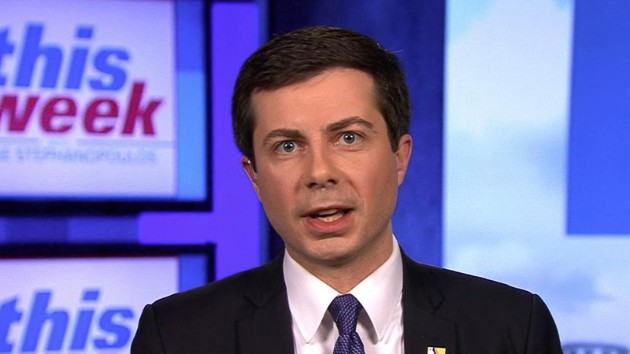 ABC News(NEW YORK) — Presidential hopeful Pete Buttigieg called on his former employer to release information about his time working for them in Iraq and Afghanistan.Buttigieg has said he is personally unable to discuss what he did due to a non-disclosure agreement he signed with McKinsey & Company before ending his employment with the firm in 2010.As ABC News previously reported, from 2007 to 2010, Buttigieg was working in the Middle East on behalf of McKinsey. But Buttigieg has said relatively little about his time in the region.The South Bend mayor’s civilian work for the consulting company — and his silence on the matter — has faced increased scrutiny as his popularity rises among the pool of 2020 Democratic primary contenders.Asked by ABC News’ Whit Johnson on Friday whether Buttigieg believes the American people should know about his work for McKinsey, Buttigieg said he believes it is important for this information to be released, and that he was urging McKinsey to release him from his non-disclosure agreement.”I don’t think that McKinsey should force me to choose between keeping my word in a legal document that I signed din good faith and the need for the American people to know,” Buttigieg told Johnson. “They can fix this by releasing it and getting that information out there.On Friday morning, Buttigieg addressed the issue in an interview with New Hampshire Public Radio.”Right now I am calling on McKinsey to release that information,” Buttigieg said. “Maybe they’re not used to doing that, but they’re not used to having somebody who used to work there being seriously considered for the American presidency. This information should come out and I’m happy to speak to it when it does.”Reached by ABC News on Friday, a spokesperson for McKinsey had no comment on Buttigieg’s request to be released from the NDA with his former employer.Buttigieg continued to emphasize his calls for McKinsey to release him from his non-disclosure agreement at campaign events throughout the day.”I believe in keeping your word,” Buttigieg said Friday at a campaign event at a house party in Concord, New Hampshire. “And I signed a legal document about client names and I am calling on McKinsey to release me from that.”Buttigieg’s comments came shortly after the Thursday publication of a New York Times editorial that called on the mayor to tell voters about his time abroad with McKinsey.”Mr. Buttigieg owes voters a more complete accounts of his time at the company,” the Times editorial board wrote. “Voters seeking an alternative to Mr. Trump should demand that candidates not only reject Mr. Trump’s positions, but also his behavior — including his refusal to share information about his health and his business dealings.”Buttigieg’s senior communications adviser, Lis Smith, tweeted Friday that the campaign was “working on” a way to get Buttigieg out of the non-disclosure agreement.In November, a campaign official told ABC News the campaign had reached out to McKinsey to inquire about what Buttigieg’s non-disclosure agreement encompasses.In response to their inquiry, the campaign official said the consulting firm said in essence that all McKinsey employees agree to keep their client work confidential, including who they serve, the nature of their projects, and each client’s confidential information.The Buttigieg campaign reached out to McKinsey a second time to ask about the Democratic presidential candidate’s release from the NDA, according to the campaign official, who added that McKinsey has yet to respond to their inquiry on that matter.In Buttigieg’s book, “The Shortest Way Home,” he scarcely mentions his consulting but does drop hints about his work in “war zone economic development to help grow private sector employment” in Iraq and Afghanistan. He also refers to a “safe house” in Baghdad. The book doesn’t say exactly when or how long Buttigieg was in either country.Copyright © 2019, ABC Audio. All rights reserved.