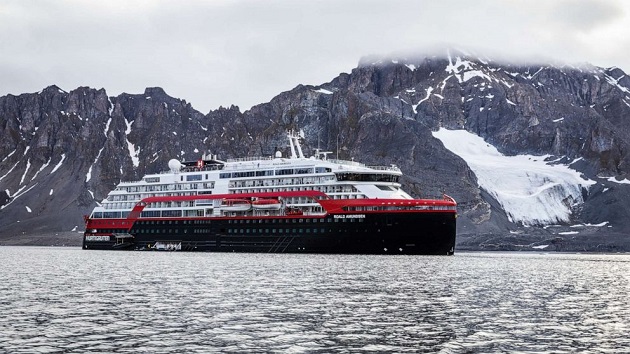 Hurtigruten AS(NEW YORK) — Cruise ships conjure up images of fun in the sun, beautiful vistas and crystal-blue waters.But along with cargo and other large ships, they are also increasingly being scrutinized as polluters — both in terms of sewage and greenhouse gas emissions. With the number of passengers exploding — nearly doubling from just a decade ago to around 30 million this year, according to industry estimates — and the number of ships around 300, some are looking to a more environmentally friendly solution.Norway-based transport company Hurtigruten AS, which offers expeditions to Antarctica and the Arctic, has constructed the first hybrid-powered expedition cruise ship to help reduce greenhouse gas emissions from the marine transport industry.The technology on the ship, named the MS Roald Amundsen after the famous Norwegian explorer who sailed the polar regions, will allow it to reduce emissions by 20%, Daniel Skjeldam, CEO of Hurtigruten AS, claimed.”Picture a Prius but at the scale of a 530-passenger cruise ship,” Skjeldam said while aboard the vessel’s 18-day maiden voyage that sailed from Valparaiso, Chile and through the Chilean fjords and Antarctica.According to the company, the ship’s two large battery packs allow the vessel’s engines to operate optimally, reducing emissions “substantially,” and also run solely on battery power “for limited periods of time.”Efforts like this are “critically important” to the environment, Jaimie Levin, director of West Coast operations for the non-profit Center for Transportation and the Environment, told ABC News.”Some of the worst emissions come from large ships and cargo movement,” Levin said.The maritime industry accounts for a fraction of all climate change emissions in the world — about 3-4%, according to Jason Hanlin, CTE’s director of technology development, told ABC News.But the impacts from each vessel can be large. The German Nature and Biodiversity Conservation Union, an environmental association, claimed in 2017 that the emissions from a medium-sized cruise ship, which burned 150 tons of fuel a day, was equal to that of one million cars. The United Nations estimates that a single large shipping vessel produces as much sulfur as 50 million cars.In Alaska, which is a stop for many cruise ships, concerns about emissions increased markedly in 2017 and 2018, according to the state’s government and an air quality monitoring program is in place in the capital of Juneau.The Cruise Lines International Association (CLIA), which represents more than 95% of the industry, says 68% of its ships have exhaust gas cleaning systems (EGCS), which reduce sulfur and carbon emissions, and 75% of new ships not relying on liquefied natural gas (LNG) will have EGCS installed. The association says 26 of its ships run on LNG and 44% of new ships plan to rely on LNG for propulsion.On its website, CLIA says the cruise industry is “at the forefront in developing responsible environmental practices and innovative technologies that lead in environmental stewardship” including EGCS and LNG fuel. “Energy efficient design standards will reduce CO2 emissions by 30 percent by 2025,” the group says.The construction of the MS Roald Amundsen falls in line with the Center’s goals, which include making marine vessels “much cleaner” with fuel cells and batteries, Levin said.The company says it was inspired to make their ships more environment-friendly after spending more than 125 years sailing Polar waters and witnessing first-hand the rapid melting of glaciers, the reduction of wildlife and the amount of plastic polluting the ocean.”Our staff have seen with their own eyes that nature has changed,” Skjeldam said.Hurtigruten AS plans to confront the travel industry as a whole and “completely” refurbish its entire fleet to be hybrid-powered or run on LNG or bio-oil, Skjeldam said. The MS Fridtjof Nansen, a sister ship to the MS Roald Amundsen, which will also be hybrid powered, is expected to be delivered from the shipyard by the end of the year, and the company aims to eventually install as many battery packs on its ships that will allow them to sail for longer periods without releasing any emissions at all.The company has also become the first cruise line to ban single-use plastics in all its ships and hotels, Skjeldam said.While the company has noble environmental goals, the MS Roald Amundsen, which counts Alaska and the Antarctic among its destinations, features all the on-board amenities and luxuries travelers would expect from a modern cruise ship, including large state rooms, pool, gym, sauna, spa, lounge and bar and three restaurants.”This is a very, very comfortable ship,” Skjeldam said. “Our guests will be outside a lot of the day to experience nature and animal life. It’s very, very nice to come back to a comfortable ship and relax between the experiences.”In addition, the vessel features a science center on board, where passengers can learn about the challenges the environment is currently facing and how they can make a positive impact, and takes tourists on unique expeditions that include sampling surrounding waters to see how much plankton or microplastics are in it.The guests have responded enthusiastically to the adding the science-based ventures into their vacation time, Skjeldam said.”If you can also change people’s minds, when they go back home, they do major change,” he said. “People feel good. It’s a great way to vacation, and they’re active, and they learn.” Copyright © 2019, ABC Audio. All rights reserved.