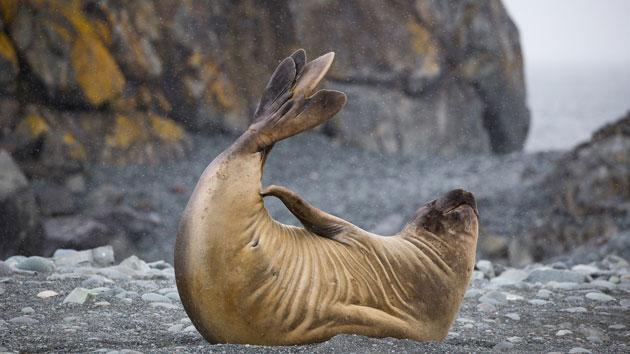 iStock(NEW YORK) — NASA scientists have playful helpers for studying the earth’s climate: elephant seals wearing hat-like antenna.The antennae have sensors that take in information about the ocean’s temperature and currents as the seals dive. While scientists have been tagging seals for decades to study their behavior, using them to study climate is a newer phenomenon.Seals spend roughly nine months of the year at sea, swimming thousands of miles and diving upward of 80 times per day, sometimes to depths of 3,300 feet. They surface for air, but can stay underwater for up to two hours at a time. Seals can also swim under the Antarctic sea ice, meaning they can accesses places that technical equipment can’t reach, according to NASA.The tags, which are attached with glue, fall off during molting season if scientists fail to collect one when retrieving the data.Lia Siegelman, a visiting scientist at NASA’s Jet Propulsion Laboratory in Pasadena, California, has been using data from a tagged female seal for a paper she published this week in the journal Nature Geoscience.”Southern elephant seals may look sluggish on land, but in the water they’re endurance athletes,” Siegelman told ABC News. “With all this diving, a tagged elephant seal collects data from the entire top layer of the Southern Ocean.”The data the seals collect will help scientists to better understand how the oceans store heat, which could be crucial as our climate warms. “Most current modeling studies indicate that the heat would move from the surface to the ocean interior in these cases, but with the new observational data provided by the seal, we found that that’s not the case,” Siegelman said in a statement.”This could be an important implication for our climate and the ocean’s role in offsetting the effects of global warming by absorbing most of the heat,” she added.Copyright © 2019, ABC Audio. All rights reserved.