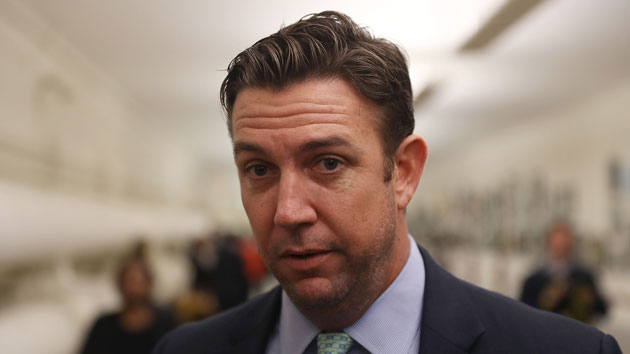 Joe Raedle/Getty Images(SAN DIEGO, Calif.) — Republican Rep. Duncan Hunter of California will resign shortly after the holidays after pleading guilty earlier this week to one count of conspiracy in a case surrounding his alleged misuse of $250,000 in campaign donations for personal expenses such as family vacations and oral surgeries.“Shortly after the Holidays I will resign from Congress,” he said in an email sent from his congressional office. ” It has been an honor to serve the people of California’s 50th District, and I greatly appreciate the trust they have put in me over these last 11 years.”He once called the investigation a politically-motivated “witch hunt.”On Thursday, the House Ethics Committee sent a letter to Hunter asking him to cease participation in floor votes following his guilty plea, citing a House rule that advises members convicted of crimes for which, “under federal law, you may receive a sentence of two or more years of imprisonment” to “refrain” from voting.”The letter cites that though the provision is not mandatory, “If you violate the clear principles of this provision- that is, by voting in the House- you risk subjecting yourself to action by this Committee, and by the House, in addition to other disciplinary action that may be initiated in connection with your… conviction,” the letter reads.Hunter was the second House Republican to endorse then-candidate Trump during the 2016 election. Trump’s first House endorsement came from GOP New York Rep. Chris Collins, who resigned in September before pleading guilty to insider trading related charges.Together, the two co-chaired Trump’s House Leadership Committee in 2016, before Trump won the nomination.He narrowly won re-election in 2018 after being indicted, along with his wife Margaret, on dozens of charges of improperly using campaign funds.Hunter also allegedly tapped into some of that money to also finance romantic trysts with multiple congressional aides and lobbyists, according to federal prosecutors in court filings.Hunter told KUSI in an interview that aired on Monday he decided to plead guilty for the sake of his children. Hunter is due to be sentenced in March. His wife, Margaret, who was also charged in the case and pleaded guilty on a single corruption count, is slated to be sentenced in April.Hunter’s move opens up the possibility of another special election in California, in addition to the one set to take place in the state’s 25th Congressional District, where Democrat Rep. Katie Hill resigned from Congress amid multiple scandals.The Democratic Congressional Campaign Committee called on its GOP counterpart to return the $220,000 in contributions Hunter donated to the National Republican Congressional Committee. Copyright © 2019, ABC Audio. All rights reserved.Copyright © 2019, ABC Audio. All rights reserved.