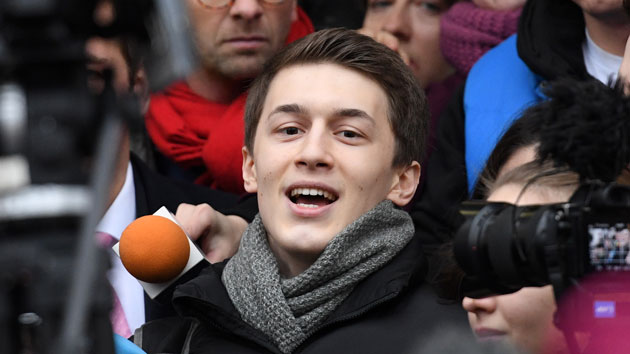 (Kirill Kudryavtsevia/AFP/Getty Images)(MOSCOW) — Russian liberal society on Monday celebrated after a Moscow court handed a student YouTube blogger an unusually lenient suspended sentence instead of prison for posting anti-Kremlin videos, a ruling they cheered as rare victory amid a crackdown by authorities following protests this summer.Yegor Zhukov, a 21-year-old political science student at a leading Moscow university, was convicted by a court earlier this week of inciting extremism in videos on his YouTube channel where he has a sizable following and has called for demonstrations against the country’s president, Vladimir Putin. Since his arrest in August, Zhukov has become a face of the wave of opposition protests that hit Moscow over the summer and his case has attracted considerable attention, with music stars and other celebrities calling for his release and attending his hearings.On Friday, dozens of mostly young supporters gathered outside Moscow’s Kuntsevsky court to demand his release, chanting “this isn’t a court it’s a kangaroo court” and “Russia without Putin”. Inside, the judge gave Zhukov the suspended 3-year prison sentence and banned him from using the internet for two years.Following the verdict, Zhukov walked out of the court into the now euphoric crowd and a scrum of cameras.Raising his fist in the air, Zhukov thanked them. “I wouldn’t be here, this wouldn’t be happening if it weren’t for you,” he said. But “we mustn’t accept a suspended sentence as freedom. It all the same is not the final victory,” he said.Three other protesters on Monday were also given unusually light sentences, with judges turning down requests for long jail terms from prosecutors, although one was still jailed for a year.The rulings were the latest is a series of trials that have become known as the “Moscow Case,” where authorities have brought harsh criminal charges against two dozen protesters who took part in the summer’s protests. For almost two months between late July and September, tens of thousands of people marched through Moscow’s center most weekends to protest the blocking of opposition candidates from local elections. Authorities responded with a fierce crackdown, arresting hundreds of people and roughly dispersing the peaceful demonstrations.Following the protests, authorities opened 24 criminal cases targeting rank-and-file demonstrators, who they accused of taking part in mass riots.So far 9 people have been convicted and given substantial jail sentences—from 2 to 3-1/2 years—for allegedly assaulting police officers, despite little and often no evidence they acted violently. Human rights groups have condemned the cases as an attempt to intimidate people from taking part in protests.Prosecutors had again asked for long sentences in the trials on Friday, requesting that all four defendants receive between 3 to 4 years jail. Besides Zhukov, one defendant, Vladimir Yemelyanov received a two-year suspended sentence; another, Pavel Novikov was fined $1,880.As in other cases, the sentences were still severe– Nikita Chirtsov, who was jailed for a year, was convicted of assault on an officer for shoving a riot officer during the protests. Yemelyanov was also convicted of using violence for having pulled an officer’s uniform and Novikov for throwing a plastic bottle.The cases have provoked anger among liberal Russians, which has spread unusually wide. A 23-year-old actor, Pavel Ustinov, was jailed for 3 1/2 years after he was violently arrested while simply standing near a protest on his phone. After new protests began and the outcry spread into the elite authorities backtracked and Ustinov was released.Zhukov’s case has also stood out. His closing statement to the court on Wednesday was shared widely on Russian social media and by independent media outlets that published lengthy passages from it.The Kremlin on Wednesday said it had taken note of Zhukov’s case, but said it didn’t want to attribute special importance to it. “We aren’t turning a blind eye to something, but we don’t feel inclined to overestimate anything,” Mr. Peskov said.Police had first accused Zhukov of taking part in mass riots but then changed that to the extremism charges linked to his YouTube videos. On the channel, where he has 155,000 subscribers, Zhukov posts political lectures, often spliced with memes and video clips, where he frequently castigates the Russian state under president Vladimir Putin, condemning it as corrupt and unjust, and discusses non-violent means of political action.Prosecutors painted four of the videos as extremist and accused Zhukov of inciting violence, despite explicit calls for peaceful protest in the videos.Ahead of Friday’s verdict it had appeared likely he would be jailed and his closing statement was picked up by many as a powerful statement of dissent.“Let’s look at ourselves in the mirror,” Zhukov told the court in the statement. “The only traditional value that the current Russian state truly honors and strengthens is autocracy. Autocracy that tries to break the life of anyone who sincerely wishes the best for their homeland, who doesn’t hesitate to love and take responsibility.””The current situation in the country destroys any opportunity for human prosperity: 10% of the most affluent Russians have concentrated 90% of the country’s wealth. What’s left below is only despair,” he said.Copyright © 2019, ABC Audio. All rights reserved.