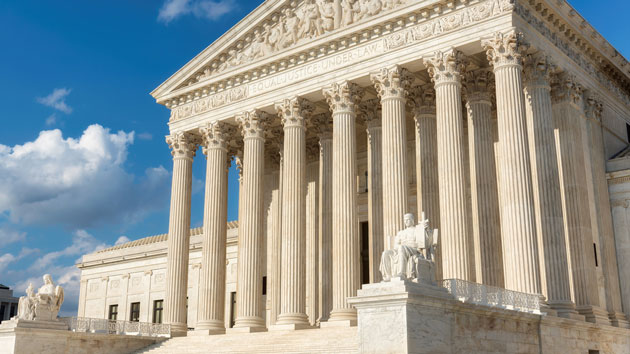 iStock(WASHINGTON) — The U.S. Supreme Court on Friday rejected a request from the Trump administration to lift an injunction on federal executions, blocking the government’s plan for five convicted murderers to be put to death by mid-January.Justices Samuel Alito, Neil Gorsuch and Brett Kavanaugh issued a statement concurring with the decision, saying “in light of what is at stake, it would be preferable for the District Court’s decision to be reviewed on the merits by the Court of Appeals for the District of Columbia Circuit before the executions are carried out.”Daniel Lewis Lee, 46, a white supremacist convicted in 1999 along with co-defendant Chevie O’Brien Kehoe in the killings of three members of an Arkansas family, including an 8-year-old girl, had been scheduled to be the first prisoner in 16 years to be executed by the federal government.Lee’s execution, originally scheduled for Monday at the U.S. Penitentiary in Terre Haute, Indiana, has now been put on hold indefinitely. He remains housed on federal death row at the prison along with 61 other condemned inmates.The decision by the Supreme Court came just days after U.S. Attorney General William Barr asked the justices to set aside a district court’s injunction preventing it from carrying out lethal injections as planned.U.S. District Judge Tanya Chutkan in Washington temporarily halted the executions after four of the five prisoners the government had scheduled for executions filed a lawsuit challenging a new lethal injection protocol.”The Justice Department upholds the rule of law — and we owe it to the victims and their families to carry forward the sentence imposed by our justice system,” Barr said in July when he announced the government was set to resume executions.The death row inmates slated for execution sued, arguing the government’s new drug protocol to be used in lethal injections violates the 1994 Federal Death Penalty Act, a law that leaves it up to the state where a capital crime was committed to prescribe the method of execution.Chutkan sided with the inmates’ argument that the federal government was attempting to circumvent proper methods for execution in a rush to carry them out.The judge, an appointee of former President Barack Obama, ruled that the federal government likely exceeded its authority by implementing a single uniform method of execution, rather than adhering to the state-by-state approach under the FDPA.”There is no statute that gives the (federal government) the authority to establish a single implementation procedure for all federal executions,” Chutkan wrote in her ruling. “To the contrary, Congress, through the FDPA, expressly reserved those decisions for the states of conviction.”On Tuesday, a federal appeals court in the District of Columbia denied the Trump administration’s plea to put Chutkan’s ruling on hold and allow the executions to be carried out. Just hours after the appeals court upheld Chutkan’s ruling, the Department of Justice asked the nation’s highest court to lift the stay.In July, Barr announced that federal executions would resume under a new lethal injection protocol in which a single drug, pentobarbital sodium, would be used.The last prisoner to face federal execution was Louis Jones Jr., 53, a Gulf War veteran convicted in federal court of kidnapping Air Force Pvt. Tracie Joy McBride, 19, in 1995 from the Goodfellow Air Force Base in San Angelo, Texas, raping her and then beating her to death with a tire iron.Jones was executed on March 18, 2003, at the U.S. Penitentiary in Terre Haute, where the only federal death chamber is located.Following Jones’s death, federal executions went dormant due to controversy over the humanness of using the old three-drug cocktail for lethal injection and a shortage on one of the drugs, sodium thiopental.On Wednesday, 14 states which use the single-drug protocol in lethal injections, filed a joint brief supporting the Trump administration’s failed request to carry out the death sentences. The states include Georgia, Idaho, Missouri, South Dakota, and Texas.Lee’s execution was opposed by loved ones of his victims — Nancy Mueller, her husband William Mueller, and her 8-year-old daughter Sarah Powell.Amnesty International, which calls the death penalty “the ultimate cruel and inhuman punishment,” released a statement in July decrying the move by the Trump administration to resume federal executions.According to the Justice of Department, other inmates that were scheduled to be executed prior to getting the reprieve from the Supreme Court’s included Lezmond Mitchell, who fatally stabbed a 63-year-old Arizona woman and her 9-year-old granddaughter; Wesley Ira Purkey, who raped, murdered and dismembered a 16-year-old Kansas City, Missouri, girl and bludgeoned to death a 80-year-old Missouri woman; and Alfred Bourgeois who tortured, sexual molested and murdered his toddler daughter.Mitchel, Purkey and Bourgeois had all been scheduled to be executed in December.Dustin Lee Honken, who shot and killed five people in Iowa in 1993, including a single mother and her 10- and 6-year-old daughters, was slated to be executed on Jan. 15.While federal executions have been frozen for 16 years, the death penalty has been carried out in several states during that time, including more than 100 in Texas and Missouri since 2012.On Thursday, Tennessee executed 53-year-old Lee Hall in the electric chair. Hall, who went blind in prison, killed his estranged girlfriend, Traci Crozier, 22, 1991 when he set her car with her inside. He was the second blind prisoner to be executed in the United States since the nation reinstated the death penalty in 1976.Copyright © 2019, ABC Audio. All rights reserved.