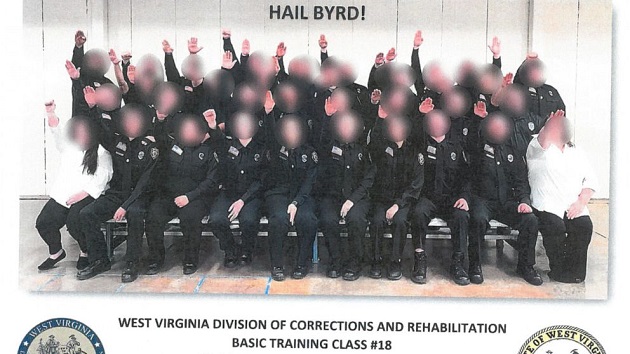 West Virginia Department of Military Affairs and Public Safety (CHARLESTON, W.Va.) — A number of West Virginia corrections employees have been suspended in response to an image of them performing a Nazi salute.The state’s Division of Corrections and Rehabilitation announced the suspensions in a letter to employees on Wednesday, calling the image “distasteful, hurtful, disturbing, highly insensitive and completely inappropriate.”The controversial image, which was printed on state letterhead, showed about 30 trainees in uniform displaying the Nazi salute under a sign that read “HAIL BYRD!” The Basic Training Class No. 18 was conducted Oct. 21 through Nov. 27.ABC News obtained a copy of the photo from the Department of Military Affairs and Public Safety.”I have seen the photo of Basic Training Class Number 18. I condemn it in the strongest possible terms,” Department of Military Affairs and Public Safety Director Jeff Sandy wrote in the letter. “It betrays the professionalism I have seen time and time again displayed and practiced by our brave correctional employees.”Sandy did not say how many employees were suspended or explain how the photo came to light.

West Virginia Division of Corrections and Rehabilitation Commissioner Betsy Jividen has ordered that all copies of the image be destroyed, sent to her office or otherwise taken out of circulation “to keep its harm from spreading,” according to the letter.”We have informed faith and community leaders of this incident,” Sandy said. “We have asked for their help to address it effectively, including with the recommended changes or additions to our training programs.”West Virginia Gov. Jim Justice also condemned the photo “in the strongest possible terms” and called for termination of the officers involved.”I have directed Secretary Jeff Sandy of the Dept. of Military Affairs and Public Safety to continue actively investigating this incident and I have ordered the termination of all those that are found to be involved in this conduct,” Justice said in a statement. “This will not be tolerated on my watch — within the Division of Corrections and Rehabilitation — or within any agency of state government.” Copyright © 2019, ABC Audio. All rights reserved.

DOJ: 4,000 beagles to be released from Virginia breeding, research facility

Families of Uvalde victims react with anger, disappointment over report on school shooting

Indiana AG told to ‘cease and desist’ over doctor