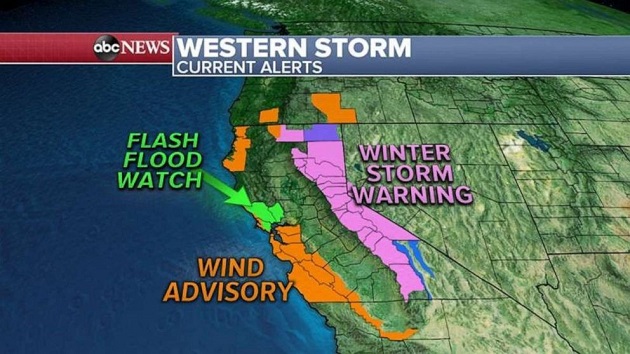 ABC News(NEW YORK) — A brand new storm will be moving into Northern California and Southern Oregon later Friday with heavy rain all the way down to the San Francisco Bay area and heavy snow in the mountains.Storm alerts have been issued from Oregon to California Friday morning.Heavy rain will move into the northern San Francisco Bay area Friday evening to finish off the rush hour. Flash flooding is possible and there is a threat of mudslides.Friday night through Saturday night, heavy rain will begin to spread through most of the West Coast from Seattle to San Diego — but these areas will not see a flooding threat like Northern California.In the mountains, very heavy snow is expected, especially in the Sierra Nevada range where 4 feet of snow is expected.By Sunday, the storm system will cross the Rockies bringing a chance of heavy snow from Colorado to Montana, where more than a foot is possible.By Sunday night and into Monday, this storm system will redevelop in the Plains and join another system coming from Canada to produce several inches of snow in the Upper Midwest and the Great Lakes, just in time for the Monday morning commute.Further south, rain — heavy at times — is expected from Chicago to Atlanta and eventually into Washington, D.C. and New York City by Monday late morning into the afternoon.Behind this cross-country storm system, the coldest air of the season will invade the northern Plains and the Midwest with wind chills well below zero and actual temperatures falling below zero as well. Copyright © 2019, ABC Audio. All rights reserved.