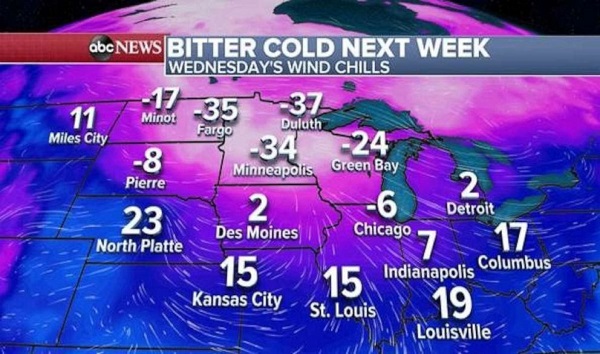 iStock(NEW YORK) — A storm has moved into the Western U.S. and it’s bringing heavy rain, wind and snow to the region today, before it moves toward the Midwest on Sunday night and early Monday.There are wind alerts, winter storm warnings, flash flood watches and winter weather advisories issued for parts of California to parts of Montana and Idaho.As the storm brings widespread precipitation to the West this weekend, it will bring periods of heavy rain to coastal California, including San Francisco and Los Angeles. Between 1- 4” of rain is expected in the San Francisco Bay area, which could cause flooding in areas.North of the Bay Area, some of the heaviest rain forecasted will fall over recent burn scars, increasing the threat of debris flows and mudslides. This includes areas affected by the Camp Fire, Mendocino Complex Fire, Carr Fire, and Kincade Fire.Rainfall rates at some of these burn areas could be as high as 0.75” per hour. Additionally, winds could gust up over 40 mph at times, which could lead to power outages in Northern California.Meanwhile in the Sierra, it will be dangerous to travel this weekend, especially in the mountain passes of I-80. Four feet of snow is expected, making travel extremely difficult. Snowfall rates could be intense at times, especially Saturday night in the Sierra near Reno, where whiteout conditions are possible.This system will join up with a couple of disturbances to bring some hazardous impacts Sunday night and Monday. The main concern will be a narrow band of snow that is likely to move into the Upper Midwest, including parts of Minnesota and Wisconsin. Additionally, heavy rain will move into parts of the Ohio Valley and East Coast.Up to 6″ of snow is possible in parts of the Upper Midwest through Monday, especially along the border of Wisconsin and Michigan. Snow is likely to impact the morning commute in Minneapolis on Monday.However, the most notable impact from this latest storm will be that it opens the door for very cold air to come into the U.S. On Wednesday morning, temperatures will drop dramatically. Wind chills will be as low as -35 in parts of the Midwest, and even down toward Chicago wind chills will be below zero. It appears right now that Minneapolis will likely not reach above zero degrees on Wednesday.By Thursday of next week, a large swath of the Central and Eastern U.S. will see temperatures below average. Copyright © 2019, ABC Radio. All rights reserved.