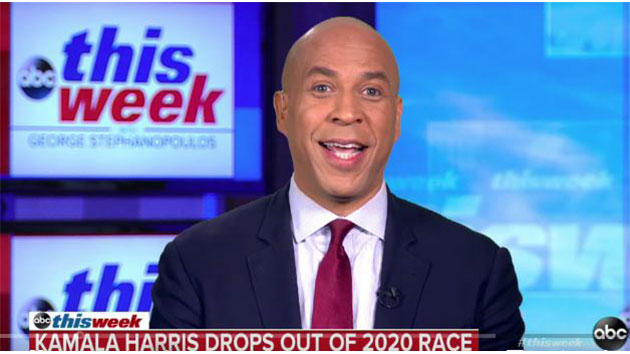 ABC News(WASHINGTON) — Days after his Senate colleague Kamala Harris suspended her presidential campaign, Sen. Cory Booker decried the “artificial barriers” winnowing the Democratic presidential field, and argued that voters in Iowa and elsewhere should be determining the candidates’ success during an appearance on ABC’s “This Week” Sunday.”Something’s wrong with the system,” Booker, D-N.J., told ABC News Chief Anchor George Stephanopoulos, noting that other metrics, such as a campaign’s field organization or endorsements, were being discounted in favor of fundraising and poll numbers.Mired in the low, single digits for much of the year and facing the prospect of missing this month’s debate in Los Angeles, Booker maintained optimism about his chances, pointing to the campaigns of Presidents Jimmy Carter and Barack Obama, who came from behind to capture the Democratic nomination.”This country is a testimony to the constant achievement of the impossible. So, we’re doing like a lot of candidates have done in the past that were discounted by national media and press,” he said, adding that in the aftermath of Harris’ decision he’s had a strong fundraising week and required “overflow rooms” for his campaign stops. The New Jersey senator — one of only two African American candidates remaining in the Democratic field — campaigned in Iowa this weekend under a spotlight after Harris suspended her presidential campaign on Tuesday.Booker lamented Harris’ exit and the Democratic primary’s waning diversity at his first Hawkeye State stop in Des Moines on Thursday.”It is a problem when an immensely qualified, widely supported, truly accomplished black woman running to lead the party — a party that is significantly empowered by black women voters — didn’t have the resources that she needed to continue here to Iowa,” he said. “It is a problem that we now have an overall campaign for the 2020 presidency that has more billionaires in it than black people.” As he did with his own campaign, Booker compared Harris to a presidential campaign predecessor on “This Week” Sunday, noting that she was in a similar situation to John Kerry in 2004, but that Kerry was able to lend his campaign the funding to continue — ultimately capturing the party’s nomination.”Kamala Harris cannot loan herself $5 million,” Booker said. “Kamala Harris stopped her campaign because of the campaign finance rules and the fact that she couldn’t do what we see billionaires doing in this race, which is flooding ads to jack up their poll numbers and get in (to the debates).”One of those billionaires, former New York City Mayor Michael Bloomberg, created controversy this week when he invoked Booker while addressing the field’s diversity during a CBS interview that aired on Thursday morning. After describing the senator as “well-spoken,” Bloomberg faced backlash from critics who argued the comment was a racist trope. The former mayor later acknowledged he “probably shouldn’t have used the word,” and on Friday Booker shared with ABC News his disappointment with the incident.”It’s not up to me to be his teacher on this issue,” the senator said. “Whoever is our nominee should not have to be explained to about why comments like that could be found to be offensive to a very important part of our constituency.”Along with former Housing and Urban Development Secretary Julian Castro, Booker’s campaign has been particularly outspoken about the racial makeup of the participants in December’s debate in Los Angeles. As of this weekend, only six candidates have gained entry to the debate, all of whom are white. Booker, who has reached the fundraising threshold to gain entry, is still four qualifying polls of 4% shy of qualification ahead of next Friday’s deadline.Booker joked on Thursday with supporters about how they can ensure his involvement in future debates. “I’m asking you, when your caller I.D. is showing that some pollster’s calling you, pick up the phone and answer, please,” he said. “Choose me. Choose us.”As some Democrats raise concerns over the electability of the presidential field’s candidates, the senator has pitched himself in recent days as someone who can build a “broad coalition” of diverse voters similar to that which first carried former President Barack Obama to victory in the 2008 Iowa caucuses and, later, that year’s general election.”I’m hoping folks will see that within me, no matter who you are, that I’m the best person in this race to revive your — what some people call the Obama coalition — but I’m talking about a bolder, broader coalition,” he told reporters in Iowa earlier this week, referring to his desire to ensure the Democratic nominee draws support from a diverse range of voters.With his campaign headed toward a critical juncture, Stephanopoulos asked Booker if he could “go all in on Iowa” when serving as a juror in the president’s impeachment trial could make that strategy “almost impossible.”Booker acknowledged that he may be pulled off the trail should the potential impeachment of President Donald Trump lead to a Senate trial, but noted that he takes his Senate oath “very seriously.” “I’m going to be in the Senate and do my job” and “trust” that we will “continue to build on this momentum” in Iowa.Copyright © 2019, ABC Audio. All rights reserved.

What to know about Hakeem Jeffries, Pelosi’s likely successor as House Democratic leader

What difference would a 51-seat Senate Democratic majority make?