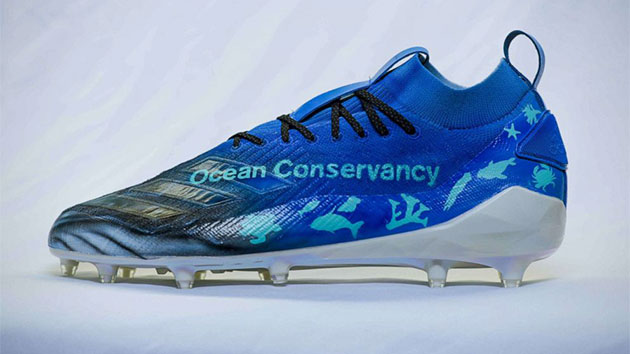 Ocean Conservacy(NEW YORK) — Several NFL players capitalizing on their stardom to raise awareness of ocean conservation are set to unveil customized ocean-themed cleats, beginning on Sunday.Six players have teamed up with Ocean Conservancy, a nonprofit environmental advocacy group, for the fourth annual My Cause My Cleats initiative, which allows players in the NFL to showcase causes that are important to them.Each participant in this year’s initiative has his own special reasons for wanting to promote healthy oceans, which are conveyed in their cleats designs.Jacksonville Jaguar wide receiver Chris Conley told ABC News his love for surfing, a hobby he picked up regularly earlier this year after an initial foray during a vacation in Hawaii, played a role in wanting to be apart of Ocean Conservancy’s cause. A trip in June to St. Barth’s, where he went scuba diving and interacted with other divers, caused him to take “an inventory” of his life and how his daily habits were contributing to the problems inundating the oceans.”The more you learn, the more you see the effects we have on [the ocean], negatively and positively,” Conley said. “If I can see an opportunity where I can help a little bit, then I’ll do it.”Although Conley mostly surfs in Jacksonville’s Neptune Beach, which tends to be on the cleaner side due to the conscientiousness of the residents, he’s seen trash on overseas beaches, such as in the Dominican Republic, he said. He hopes by wearing the cleats, which feature ocean waves and a humpback whale, during Sunday’s game against the San Diego Chargers, he’ll be able to “help educate some people about the effects we can have.”Conley also does his part by picking up errant debris he sees lying on the beach or even on the side of the road, encouraging others to do the same because they’re “eventually going to get washed down to the rivers and into the [ocean] water,” he said.Other players taking part in “My Cause My Cleats” on Sunday include San Francisco 49ers running back Raheem Mostert, whose cleats are decorated with sharks to pay homage to his hometown in New Smyrna Beach, Florida, known as the “Shark Bite Capital of the World,” as well as waves to represent his passion for surfing. Detroit Lions linebacker Jahlani Tavai will wear cleats adorned with the eight main islands in Hawaii, which pay homage to his time at the University of Hawaii. The pod of Killer whales on Atlanta Falcons offensive tackle Kaleb McGary’s cleats highlight the marine life near Puget Sound, where he grew up, and Geremy Davis’ cleats feature sea turtles, his favorite marine species.Miami Dolphin Jonathan Jenkins will be wearing his cleats, which feature a variety of iconic Florida wildlife as well as scenery from the Gulf of Mexico, during the Dec. 22 game against the Cincinnati Bengals, his team’s next home game. Most of the players collaborated with designers to for the final rendition of their cleats, but Mostert designed his entirely on his own.Working with the NFL allows the Ocean Conservancy to “broaden the message,” given the scale and scope of what’s happening in the world’s oceans, George Leonard, the organization’s chief scientist, told ABC News. The decline of ocean health is the product of “putting too much in and taking too much out,” Leonard said. Globally, the oceans are being harmed by overfishing as well as by too much carbon dioxide entering the ocean, which is linked to climate change.To mitigate pollution, Ocean Conservancy has set a goal to remove and divert 54 tons of plastic and other waste from Florida’s coasts and waterways s part of the Miami Super Bowl Host Committee’s Ocean to Everglades environmental initiative.The organization is using the platform for the “biggest sporting event on the planet” to highlight the importance of a healthy ocean, which generates half of the earth’s oxygen and about 30% of the “primary protein” to 3 billion people, Leonard said.”We think this is something that all of us can be concerned about,” he added.Conley reminds people all over the country that there are several ways that they can help conserve the ocean, including participating in something as simple as a beach cleanup or by limiting their use of single-use plastics, such as replacing plastic straws, which can’t be recycled, with metal ones. Copyright © 2019, ABC Audio. All rights reserved.