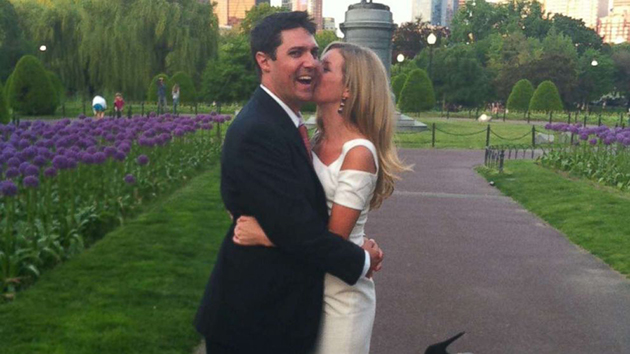 (Courtesy Frates Family) Pete and Julie Frates are seen here in this undated photo.(BOSTON) — Peter Frates, the man who championed the viral Ice Bucket Challenge to raise money to find a cure for amyotrophic lateral sclerosis (ALS), has died.”Peter Frates. A husband to Julie, a father to Lucy, a son to John and Nancy, a brother to Andrew and Jennifer, Pete passed away surrounded by his loving family, peacefully at age 34, after a heroic battle with ALS,” a statement said Monday. “Pete was an inspiration to so many people around the world who drew strength from his courage and resiliency.”In summer 2014, the Ice Bucket Challenge flooded the internet, with people from Irish nuns to celebrities to entire pro sports teams filming themselves dumping buckets of ice water on their heads and then challenging their friends to do the same and donate money to research for ALS, also known as Lou Gehrig’s disease.

Frates, a young college athlete from suburban Massachusetts, helped make the challenge go viral after receiving his own ALS diagnosis.Growing up outside Boston, Frates was a three sport all-star in high school. He was captain of the football and hockey teams, but baseball was his life’s passion.He went on to play center field for Division I Boston College, and in his final year, Frates was named captain of the baseball team.After a short stint playing professional ball overseas, Frates came back to Boston to start a job selling insurance and met the love of his life, Julie Frates. The two dreamed of marriage and children, but only six months after they started dating, Frates said he started feeling odd and having trouble with simple tasks like buttoning his shirt. After a series of tests, doctors asked him to come in — and to bring his parents with him. Frates was diagnosed with ALS.ALS is a rare neurological disease that robs patients of their movements, their voice and eventually, the ability to breath, all while the mind stays alert. Almost immediately after learning he had ALS, rather than wallowing, Frates started looking at the diagnosis as a dare. Ever the team captain, he took the reins of his disease from day one.”Remarkably, Pete never complained about his illness. Instead, he saw it as an opportunity to give hope to other patients and their families. In his lifetime, he was determined to change the trajectory of a disease that had no treatment or cure,” his family said in the statement, shared by Boston College.Frates launched a mission to raise money to find a cure. He also married Julie.Two-and-a-half years into his diagnosis, Frates challenged “hundreds of best friends,” reaching into a network of athletes with massive social media followings, to give them 24 hours to dump an ice bucket over their heads or donate to ALS. Almost instantly, major athletes, including Atlanta Falcons quarterback Matt Ryan, who went to Boston College, and Julian Edelman, a wide receiver for the New England Patriots, were taking the challenge. Then it spread to include NBA giants Lebron James and Kevin Durant, and celebrities like Oprah Winfrey, Chris Pratt, Justin Bieber, Lady Gaga and dozens of others.”As a result, through his determination — along with his faithful supporters, Team Frate Train — he championed the ALS Ice Bucket Challenge. In August of 2014, the historic movement pioneered social media fundraising and garnered donations globally that resulted in better access to ALS care, genetic discoveries, treatments and, someday, a cure. He was a beacon of hope for all,” the family’s statement said.In just six weeks, the Ice Bucket Challenge raised almost a quarter of a billion dollars. But as ALS research progressed, Frates’ body continued to decline.What Frates was able to prove, his family said previously, is that one person can change the world.”On behalf of Julie, Lucy, John, Nancy, Jennifer and Andrew, along with his extended family and multitude of friends, we ask that you celebrate Pete and the hope that he has given to so many by following his daily affirmation: Be passionate, be genuine, be hardworking and don’t ever be afraid to be great,” his family said. “The Frates family wishes to express its sincere gratitude for the abundant love, kindness, and support we have been the recipients of during the past eight years.”The family asked friends and supporter to consider making a donation to the Peter Frates Family Foundation, whose “mission is to aid progressed ALS patients in their desire to stay at home with those who love them most.”