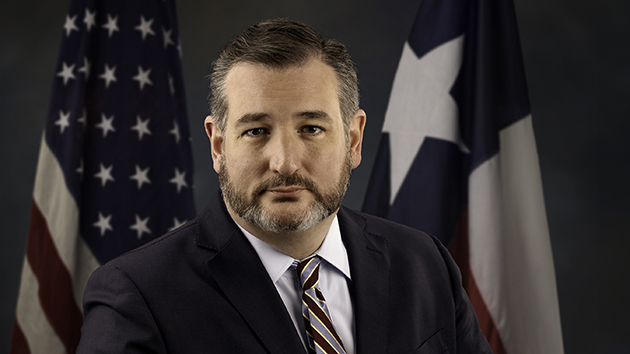 Credit: Office of Sen. Ted Cruz (R-Texas) (NEW YORK) — GOP Sen. Ted Cruz of Texas won praise from President Donald Trump on Monday after he became the latest Republican senator to suggest Ukraine meddled in the 2016 election, a widely debunked conspiracy theory that the U.S. intelligence community has also notably disputed.“I do. And I think there’s considerable evidence of that,” Cruz said when he was asked on NBC’s Meet the Press Sunday if he believes Ukraine meddled in the 2016 election.“Russia clearly interfered in our election. But here’s the game the media is playing. Because Russia interfered, the media pretends nobody else did. Ukraine blatantly interfered in our election,” Cruz said.Cruz pointed to a 2016 op-ed written by a former Ukrainian ambassador blasting President Donald Trump as proof that interference occurred. In the op-ed, the ambassador expressed concern about then-candidate Trump’s comments that he would consider recognizing Putin’s military annexation of Crimea.His television interview did not go unnoticed by Trump, who thanked Cruz during a roundtable discussion on education policy at the White House on Monday.

“By the way you were great on television this weekend. I admired that very …. you did a fantastic job. Everyone’s talking about it in a very positive way, too, so, congratulations,” Trump said to Cruz.Cruz’s assertions about Ukraine were endorsed last week by Sen. John Kennedy, R-La., who also insisted “both Russia and Ukraine meddled in the 2016 election.”Kennedy asserted that news media reports indicated that the former Ukrainian president favored the former secretary of state to win the presidency over then-Republican nominee Donald Trump.”I think it’s been well documented in the Financial Times, in Politico, in the Economist, in the Washington Examiner, even on CBS, that the prime minister of Ukraine, the interior minister, the Ukrainian ambassador to the United States, the head of the Ukrainian Anti-Corruption League, all meddled in the election on social media and otherwise,” Kennedy said last week.”The fact that Russia was so aggressive does not exclude the fact that President Poroshenko actively worked for Secretary Clinton,” the Louisiana Republican added.Despite Kennedy and Cruz’ claims, there is no evidence that suggests the Ukraine government aided Clinton in 2016.At the Kremlin’s direction, Russian intelligence services waged a pro-Trump disinformation campaign on social media and secretly stole tens of thousands of private emails from the Democratic National Committee, the U.S. intelligence community concluded.Cruz was asked if he had participated in any intelligence briefings provided to members of Congress on Russia’s efforts to shift blame to Ukraine over election interference.“I have been in multiple briefings. I have been in multiple briefings, year after year after year, about foreign interference in our election. Russia has tried to interfere in our elections. China’s tried to interfere in our elections. North Korea’s tried to interfere in our elections. Ukraine has tried to interfere in our elections,” Cruz said. “This is not new. 2016’s not the first year they did it. And they’re going to keep trying. And so we need to be strong in dealing with it. But the media needs to actually report facts.”A handful of Republican senators have refuted the unfounded claims in recent days.”I saw no evidence from our intelligence community, nor from our representatives today from the Department of State, that there is any evidence of any kind that suggests Ukraine interfered in our elections,” Sen. Mitt Romney, R-Ut., said last week. “We have ample evidence that Russia interfered in our elections.”Even the president’s top Republican ally in the Senate, Lindsey Graham, said he’s seen no evidence suggesting election interference by Ukraine.”I have no knowledge that the Ukraine did anything to interfere with our elections other than the press reports,” Graham told reporters, “and to suggest that we know that, I think, would be a stretch, because I don’t think anybody does.”Sen. Marco Rubio, G-Fla., told POLITICO last week that it’s common for countries to prefer one presidential candidate over another.“I think it’s important to distinguish op-eds… from the systemic effort to undermine our election systems,” Rubio said. “There’s no way to compare any other efforts to what Russia did in 2016. … There’s nothing that compares not even in the same universe.”

Minority Leader Chuck Schumer weighed in at a Monday news conference.”The President’s defenders have repeated this conspiracy anyway, including shamefully several of my colleagues in the Senate, in an effort to protect the president at all costs, the Grand Old Party in the Senate has become the conspiracy caucus. One conspiracy theory after another, none of them with basis and fact. It’s no laughing matter. These conspiracies are not harmless, they are sinister, they are insidious, they damage our democracy,” Schumer said.”The fact that Senate Republicans are willing to put wild wind into the sails of these baseless conspiracy theories is beyond alarming, it hurts our country. It hurts our country,” he said. Cruz’s comments come after several administration officials have warned against Russia’s efforts to pit the blame on Ukraine.The No. 3 State Department official, Undersecretary of State for Political Affairs David Hale, testified before the Senate Foreign Relations Committee that he wasn’t aware of Ukraine meddling in 2016.”Are you aware of any evidence that Ukraine interfered in the 2016 U.S. election?” the top Democrat on the committee, Sen. Bob Menendez of New Jersey, asked Hale during a committee hearing last week.”I am not,” Hale replied.The White House’s former top Russia expert, Fiona Hill, who testified before the House Intelligence Committee last month as part of the House impeachment inquiry, also said the theory that Ukraine interfered in 2016 is “a fictional narrative that is being perpetrated and propagated by the Russian security services themselves.” Copyright © 2019, ABC Audio. All rights reserved.