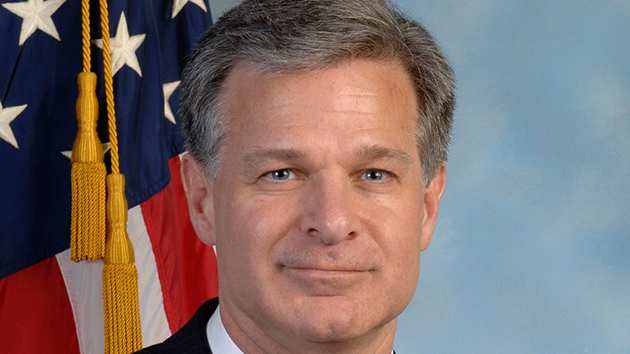 Credit: FBI(WASHINGTON) — FBI Director Christopher Wray offered mixed reactions to a Justice Department watchdog report that uncovered “serious performance failures” on the part of agents involved in the Russia investigation but ultimately determined the bureau was justified in launching its probe.

In an exclusive broadcast interview with ABC News, Wray lamented “actions described in this report that [he] considered unacceptable and unrepresentative of who we are as an institution.” But, he said it was “important that the inspector general found that, in this particular instance, the investigation was opened with appropriate predication and authorization.”Justice Department Inspector General Michael Horowitz on Monday released his 478-page report chronicling the circumstances surrounding the FBI’s surveillance of members of Donald Trump’s 2016 presidential campaign. The president has called it “a major SPY scandal” and accused those involved of working on behalf of the “Deep State.”

But the president and his allies have called it “a major SPY scandal” and accused those involved of working on behalf of the “Deep State.”

“We did not find documentary or testimonial evidence that political bias or improper motivation influenced the FBI’s decision to seek [surveillance] on Carter Page,” Horowitz wrote.Wray did not respond directly to the president, but pushed back on the “Deep State” characterization of the bureau’s work.”I think that’s the kind of label that’s a disservice to the men and women who work at the FBI who I think tackle their jobs with professionalism, with rigor, with objectivity, with courage,” Wray said. “So that’s not a term I would ever use to describe our work force and I think it’s an affront to them.”Horowitz’s report chronicled a series of major errors and omissions related to the surveillance application targeting a former Trump campaign aide that “made it appear that the information supporting probable cause was stronger than was actually the case.””In my view, every error and omission is significant and it’s something we need to take seriously,” Wray told ABC News.The president and his allies have long alleged that the Trump campaign was illegally spied on, aggressively accusing both the Obama administration and the FBI of carrying out what Trump has called “one of the biggest political scandals in history.”Asked whether he thought the FBI unfairly targeted the Trump campaign, Wray offered a terse reply: “I do not.”Attorney General William Barr made headlines in April 2019 when he told a Senate panel that “spying did occur” on the Trump campaign, adding there was a need to “explore” whether the probe was “adequately predicated.” Wray has previously said “spying” is “not a term I would use,” and on Monday reiterated that point.”Again, different people have different colloquial terms,” he said, ” but we use terms like ‘investigation’ and ‘surveillance."”

Wray also pushed back on a widely debunked theory put forth by the president and his allies that Ukraine, not Russia, interfered in the 2016 election – and sounded the alarm on the Kremlin’s plans for the 2020 cycle.“We have no information that indicates that Ukraine interfered with the 2016 presidential election,” Wray said, adding that “as far as the [2020] election itself goes, we think Russia represents the most significant threat.”Wray took over the FBI’s top spot in August 2017, months after James Comey’s dismissal from the position. After releasing his report Monday, Horowitz is expected to face lawmakers on Wednesday in a public hearing before the Senate Judiciary Committee. Copyright © 2019, ABC Audio. All rights reserved.