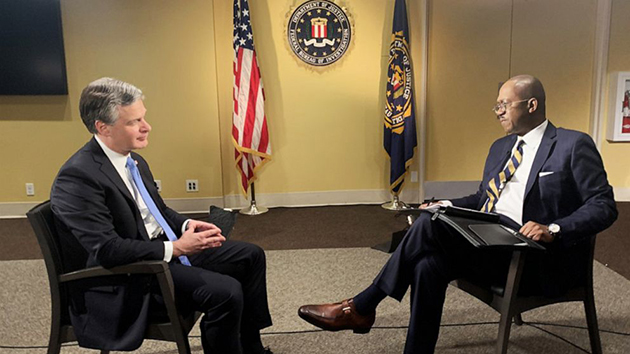 (Luke Barr/ABC News) FBI Director Christopher Wray speaks with ABC News’ Chief Justice Correspondent Pierre Thomas in an exclusive interview on Dec. 9, 2019. (WASHINGTON) — FBI Director Christopher Wray on Monday undercut a theory pushed by President Donald Trump and some of his Republican allies that the government of Ukraine meddled in the 2016 election.”We have no information that indicates that Ukraine interfered with the 2016 presidential election,” Wray told ABC News in an exclusive broadcast interview on Monday.Wray is the most senior, currently serving, government official to undercut the claim — pushed as recently as Sunday by Sen. Ted Cruz, R-Texas, in an interview about the ongoing impeachment inquiry.”Here’s the game the media is playing. Because Russia interfered, the media pretends nobody else did. Ukraine blatantly interfered in our election,” Cruz said Sunday on NBC’s “Meet the Press.”When asked about the claim, Wray urged Americans to be cautious about their sources of information.”Well, look, there’s all kinds of people saying all kinds of things out there. I think it’s important for the American people to be thoughtful consumers of information, to think about the sources of it and to think about the support and predication for what they hear,” he said. “And I think part of us being well protected against malign foreign influence is to build together an American public that’s resilient, that has appropriate media literacy and that takes its information with a grain of salt.”In a call with Ukrainian President Volodymyr Zelenskiy, Trump requested he look into claims about “CrowdStrike,” referencing a debunked conspiracy theory that claims Ukraine, not Russia, hacked into the Democratic National Committee’s computer networks in 2016.Asked about that theory, Wray didn’t directly respond to the president’s claim but underscored that the FBI has no evidence to support such a claim.”As I said, we at the FBI have no information that would indicate that Ukraine tried to interfere in the 2016 presidential election,” he said.In addition, Wray said that he didn’t speak with Rudy Giuliani, the president’s personal attorney, about any investigation into the Bidens.”I haven’t had any conversations with Rudy Giuliani,” Wray said.

Wray also cautioned that election interference is still a concern moving into 2020.”Well, as far as the election itself goes, we think Russia represents the most significant threat to the election cycle itself,” he said.”But we certainly know that other nation states, China, Iran, others have an interest in influencing our democracy in other ways through different forms of engagement, different types of malign foreign influence. So we are trying to make sure that we’re working hard with others to protect America against all those threats,” Wray added.