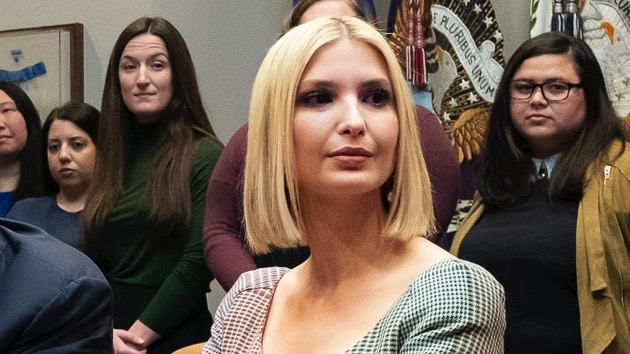 Official White House Photo by Tia Dufour(WASHINGTON) — Nearly a decade before the 2016 presidential campaign, Donald Trump’s daughter Ivanka met a British intelligence officer who ran the Russia desk — and when the agent left his covert service and moved into private practice in 2010, she stayed in touch, ABC News has learned.The two exchanged emails but never worked together, and the man, Christopher Steele, would one day re-emerge in a most unexpected way, taking a central role in the Russia scandal that consumed the early years of her father’s presidency, according to a source familiar with their past contacts.The prior relationship came to light as investigators with the Department of Justice Inspector General’s office was looking into allegations of political bias at the origins of the Russia investigation since May 2018.Steele gained notoriety as the investigator who ignited a firestorm by authoring the highly controversial 2016 dossier alleging links between the Trump Campaign and Russia, and embarrassing incidents involving Trump before he took office. Critics of Steele have argued that the former intelligence officer was biased against Trump and was inclined to produce a negative report on the presidential candidate – excoriating Steele on social media and elsewhere.In 2007, Ivanka Trump met Steele at a dinner and they began corresponding about the possibility of future work together, the source said. The following year, the two exchanged emails about meeting up near Trump Tower, according to several emails seen by ABC News. They suggest Ivanka Trump and Steele stayed in touch via emails over the next several years. In one 2008 exchange they discussed dining together in New York at a restaurant just blocks from Trump Tower.Ivanka Trump worked as an executive vice president at the Trump Organization, managing a range of foreign real estate projects, including in parts of the world where Steele’s firm, Orbis Business Intelligence touted expertise. She and Steele discussed services Orbis could offer to the Trump Organization regarding its planned expansion into foreign markets, according to two sources familiar with the meetings.While Steele is a Russia expert, Orbis had a broad portfolio. No formal arrangement followed.ABC News first learned of the contacts between Ivanka Trump and Steele a year ago, but has only recently been able to view some of their communications.Members of President Trump’s family have never publicly discussed the interactions – and their past meetings with Steele went unmentioned as the Trumps leveled charges against the British intelligence expert in the wake of the controversial and hotly disputed memos he wrote about President Trump.ABC News sought comment from Ivanka Trump through her attorney, but has not received a reply. Both Steele’s attorney and a representative for Steele’s firm, Orbis Business Intelligence declined to comment. The White House did not immediately respond to a request for comment.The inspector general’s report, which was released publicly Monday, briefly references these past dealings. In his discussion with investigators from the inspector general’s office, Steele cited his past cordial relationship with Ivanka Trump as reason to believe that he was not biased against her.“If anything he was ‘favorably predisposed’ towards the Trump family before he began his research,” he told the investigators, the report says.Steele told investigators he met with “a Trump family member at Trump Tower and ‘been friendly’ with [the family member] for some years,” even gifting the person “a family tartan,” and that the idea he was biased against the family from the start was “ridiculous,’” according to the report. The report does not include the name of the individual.Trump and his supporters have long held that Steele’s dossier, which the president blasted as phony, was a source of the probe that lasted nearly two years. The probe was already underway when the documents went public.President Trump and his political supporters have depicted Steele as a villain since word of his role in creating the dossier became public. The president called him “dopey” and a “failed spy” and on Twitter referred to him as “Steele of fraudulent Dossier fame” who was “tied into Crooked Hillary.”A retired MI6 officer who founded the London-based intelligence firm Orbis, Steele was hired by opposition research firm Fusion GPS in 2016 to research then-candidate Trump’s Russia ties.In June 2019, he was interviewed by DOJ officials who had traveled to London for the review. Copyright © 2019, ABC Audio. All rights reserved.